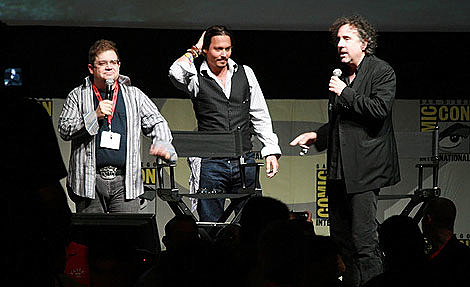 "Some of the 3-D effects aren't going to look absolutely perfect," said Patton Oswalt, the comedian and voice actor who moderated a presentation of Disney's forthcoming "A Christmas Carol," "Alice in Wonderland" and "Tron: Legacy." Mr. Oswalt asked attendees not to blog about effects being "quite subpar." [NY Times]

The New York Comedy Festival isn't until November 4 - 8, but with the line-up just announced, Carnegie Hall tix available now, and ticket presales (and some on sales) starting on August 12, the time to mention it is NOW. This is the 6th installment of the festival and unlike NYC music festivals such as CMJ or Northside (festivals where you can wander the city for days on end catching hundreds of bands), the focus here is on having a few large-scale shows over the course of a few evenings. NYC is a place where you can catch cheap or free comedy with big name talent almost every evening, but sometimes it's nice to venture out of the back rooms, basements, and comedy clubs and see one or two of your faves at a fancy pants venue. The full schedule is below, but for me some of the better highlights include:

November 4:
"STAND UP FOR HEROES" a special benefit presented by NYCF and the Bob Woodruff Foundation at Town Hall

So many venues, so many different ticket buying dates, times, and channels. Here's the deely-o regarding ticket sales