"We are going to miss him terribly" - David Johansen 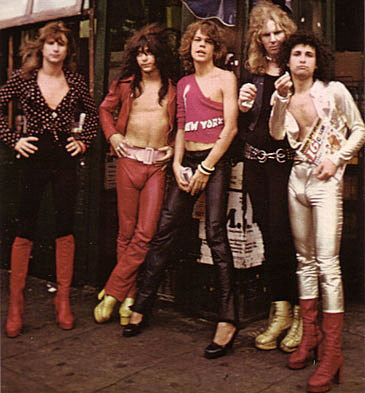 Recording artist, manager of the Sex Pistols, provocateur, fashion designer, impresario -- Malcolm McLaren, who died of cancer April 8th at 64 was all those things. He was also, briefly, the manager of the New York Dolls just before their breakup in 1975. Dolls guitarist Sylvain Sylvain spoke with Rolling Stone about his encounters with McLaren. "I always thought the most important member of the Sex Pistols was Malcolm McLaren," Sylvain says. "When they got back together in the '90s, I thought, 'They're missing their most important star, and that was Malcolm.' "

Rolling Stone: When did you first meet McLaren?

NY Doll Sylvain Sylvain: It was at a clothing trade show back in 1971 in New York City. I had a knitwear company, and he and Vivienne [Westwood] were down at the end of the hallway with their clothing line Let It Rock, which was basically rockabilly clothing. Malcolm had this long blond pompadour, long sideburns and white baggy pants. He was like Jerry Lee Lewis, really cool looking. On the last day of trade shows, designers sell their samples, so I said to David Johansen and Johnny Thunders, "You gotta come over." So we bought some things from Malcolm and Vivienne and invited them down to see us at the Mercer Arts Center. He fell in love with the New York Dolls, and we fell in love with them. Vivienne would tell us, "You boys look so much better in women's clothing."

Malcolm McLaren also managed The Sex Pistols. You can hear what Sex Pistol & PiL frontman Johnny Rotten has to say about him HERE.

About to kick off a tour in Europe, it has been announced that the New York Dolls will play Warsaw in Brooklyn on Saturday, May 22nd. Tickets are on sale for the joint Knitting Factory and Scenic production.

You can also catch David Johansen solo on June 27th at Highline Ballroom. All dates and some videos below...