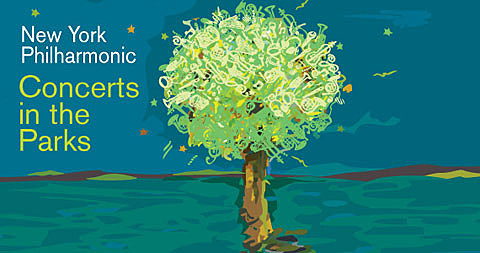 "A beloved New York tradition, Concerts in the Parks returns for its 47th season with five free outdoor concerts throughout the New York City boroughs, plus a free indoor concert in Staten Island. Music Director Alan Gilbert will lead the Philharmonic in concerts at Central Park and Prospect Park and conductor Andrey Boreyko will conduct concerts in Cunningham Park, Van Cortlandt Park and Central Park with violinist James Ehnes as soloist. Music under the stars with family and friends makes for a perfect summer evening. And it's free -- join us!"

The 2012 Concerts in the Parks series begins tonight (7/11) in Prospect Park - probably not at the bandshell where Dirty Projectors played last night, but right behind there in the longer field. Regardless, you can enter at the same place ("Enter at Grand Army Plaza, Prospect Park West at 9th Street or Bartel-Pritchard Circle at the intersection of Prospect Park West, Prospect Park Southwest and 15th Street."). Thursday is Queens, Friday and Monday are Central Park. Full schedule below...