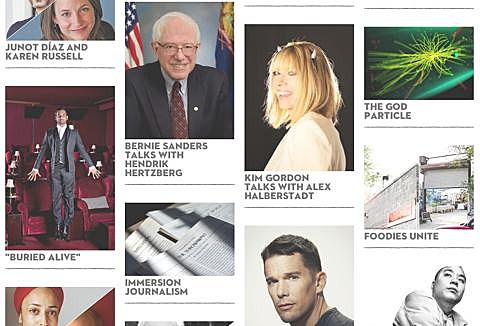 As mentioned, the 2013 New Yorker Festival happens October 4, 5, and 6. They just announced this year's line-up which, as usual, is a mix of interviews, talks, screenings, tours and a few live music performances.

On the music tip: Kim Gordon will talk with Alex Halberstadt and perform with her new band, Body/Head on October 5 at SIR Stage 37; actor and all-around cool guy Michael Shannon (Boardwalk Empire) will talk with Burkard Bilger and perform with his indie rock band, Corporal at The Bell House on October 4; country music star Brad Paisley will be in conversation with music writer Kelefa Sanneh at Gramercy Theatre on October 5; and Paul Simon talks with Paul Muldoon at the SIR Stage 37 on October 6.

There is, of course, lots more. The full list of events is in this post and head to the New Yorker Fest's website for dates and details.

Tickets will go on sale on Friday, September 13 at noon. Full line-up is below...

• "An Evening with Funny or Die," which will feature new videos and surprises with the comedy Web site Funny or Die. The event will be hosted by Billy Eichner, the comedian, actor, writer, and host of the Emmy-nominated television show "Funny or Die's Billy on the Street."

• An advance screening of the actor and comedian Aziz Ansari's new comedy special, "Buried Alive," premièring on Netflix in November, followed by a conversation between Ansari and Andy Borowitz.

This year's series of interviews includes:

• Jill Abramson, the executive editor of the New York Times, and Ken Auletta

• Bernie Sanders, the junior United States Senator from Vermont and the longest-serving independent member of Congress in American history, and Hendrik Hertzberg

• Tavi Gevinson, the founder of Rookie, an online magazine written largely by and for teen-age girls, and Lizzie Widdicombe

• A panel, "Television and Politics," will feature Shonda Rhimes, the executive producer of ABC's "Scandal"; Armando Iannucci, the cre­ator of the HBO series "Veep"; Robert and Michelle King, executive producers of CBS's "The Good Wife"; and W. Kamau Bell, the star of FXX's "Totally Biased with W. Kamau Bell." Emily Nussbaum will moderate the event.

• "First-Person Filmmaking" will feature Alex Karpovsky, the writer and director ("The Hole Story" and "Red Flag") who plays Ray on the HBO series "Girls"; Miranda July, the filmmaker, writer, and performance artist who directed, wrote, and starred in "The Future" and "Me and You and Everyone We Know"; Kenneth Lonergan, the writer and director of the films "Margaret" and "You Can Count on Me," and co-writer of the screenplays for "Analyze This" and "Gangs of New York"; and Terence Nance, who wrote, directed, and starred in "An Oversimplification of Her Beauty," which premièred at the Sundance Film Festival last year. The event will be moderated by Richard Brody.

• "Without a Script" will feature actors and comedians who started their careers in improv, including Rachel Dratch, formerly of "Saturday Night Live"; Christopher Guest, the co-writer, director, and star of "Waiting for Guffman," "Best in Show," and "For Your Consideration," among others; Aubrey Plaza, the actress who plays April Ludgate on the NBC sitcom "Parks and Recreation"; and Horatio Sanz, a found­ing member of the Upright Citizens Brigade and former "Saturday Night Live" cast will be moderated by Susan Mor­rison.

• Jon Lee Anderson and Dexter Filkins will talk with their editor, Nick Trautwein, about reporting from conflict and disaster zones, in­cluding Iraq, Afghanistan, Syria, Cuba, Mali, and more. During the discussion, Anderson and Filkins will show artifacts brought back from the regions they've covered.

• "Immersion Journalism" will feature the New Yorker writers Katherine Boo, Raffi Khatchadourian, George Packer, and Sarah Stillman talking about their craft. The event will be moderated by David Remnick.

• "Is Technology Good for Culture?" will feature Clay Shirky, the technology writer, consultant, and teacher, and the novelist Jonathan Franzen in an exchange of ideas about media criticism and the digital age. The talk will be moderated by Henry Finder.

• "Spy vs. Spy," a panel on the art of espionage, will feature Antonio J. Mendez, the former C.I.A. agent whose experiences inspired the film "Argo"; Jeffrey Moss, a hacker and the founder of Defcon, one of the largest gatherings of hackers in the world; Stella Rimington, the for­mer director general of MI5, the United Kingdom's domestic counterintelligence agency; and Joseph Weisberg, the creator and executive producer of the FX spy drama "The Americans." The event will be moderated by David Grann.

• "The New Burlesque" will be a panel discussion and performance by burlesque stars James Tigger! Ferguson, World Famous *BOB*, Murray Hill, and Dirty Martini. The event will be moderated by Joan Acocella.

• Noah Baumbach, who wrote and directed the films "Kicking and Screaming," "Margot at the Wedding," "Greenberg," and "The Squid and the Whale," will converse with Greta Gerwig, the star of "Frances Ha," which she co-wrote with Baumbach. Ian Parker will moderate.

• There will be a sneak preview of the new documentary "The Phantom Tollbooth: Beyond Expectations," about the classic children's novel, followed by a conversation between Adam Gopnik and the book's author, Norton Juster, and illustrator, Jules Feiffer.

• The U.S. première of the new film "Philomena," about a journalist following the story of a woman's search for her son, starring Judi Dench and Steve Coogan. Afterward, the director, Stephen Frears, will talk with David Denby.

• In a series of talks, Atul Gawande will explain why health care still confounds us; Malcolm Gladwell will discuss "Tokens, Pariahs, and Pioneers"; James Wood will discuss fiction and life's biggest questions; and Jill Lepore will explore the hidden history of privacy.

• The New Yorker writers Jon Lee Anderson, Dana Goodyear, and Hisham Matar, along with the longtime copy editor Mary Norris and the cartoonist Matthew Diffee, will gather for an evening of stories about life at the magazine, presented in conjunction with the Moth per­formance series and hosted by Andy Borowitz.

This year's About Town excursions will include:

• A workshop featuring Momofuku's iterations of traditional fermented foods, such as pickled vegetables and kimchi, with the chef David Chang, who will talk about his food empire with Larissa MacFarquhar over a three-course meal and Milk Bar desserts

• A discussion about the rise of American food culture over a collaboratively prepared lunch served in the garden of Roberta's, in Bushwick, Brooklyn, with Dave Arnold, a mixologist and molecular gastronomist and the founder of the Museum of Food and Drink, in New York; Amanda Cohen, the chef and owner of Dirt Candy, a vegetable restaurant in the East Village; Ariane Daguin, the owner and co-founder of D'Artagnan, a purveyor of foie gras, game meat, organic poultry, pâtés, sausages, and smoked delicacies; and Sean Rembold, the executive chef at the Williamsburg restaurants Diner and Marlow & Sons

• A tasting of rare whiskies, including one not yet available in America, with Simon Coughlin and Jim McEwan, of the Scottish distillery Bruichladdich, who will discuss their craft with Kelefa Sanneh

• A lunch at Bergdorf Goodman's BG Restaurant, where Betty Halbreich will talk with Lena Dunham and Judith Thurman about her decades-long career as a personalshopper

• An afternoon celebrating the release of "Rookie Yearbook Two" with Rookie founder Tavi Gevinson and the writers and editors of the online magazine, featuring music, ice cream, and a reader talent show

• A tasting walk from Greenwich Village to Chinatown with Calvin Trillin

• A trip to Staten Island with Ian Frazier, who will lead a bus tour of his favorite haunts, culminating with a late lunch at Enoteca Maria, where each day the cook is a grandmother from a different region of Italy

There will be conversations with music, featuring:

• The experimental rock musician Kim Gordon, performing with her band Body/Head, who will talk with Alex Halberstadt

• The actor Michael Shannon, of "Revolutionary Road" and the HBO drama "Boardwalk Empire," who will talk with Burkhard Bilger and perform with his band Corporal

• A panel, "One Year After Sandy," will feature Heidi Cullen, the chief climatologist at Climate Central, a nonprofit science-journalism or­ganization; Klaus Jacob, a geophysicist at the Lamont-Doherty Earth Observatory, at Columbia University; Piet Dircke, an expert on global water management, climate adaptation, and delta cities; and Jerrold Nadler, a United States congressman representing New York's Tenth Congressional District. The panel will be moderated by Elizabeth Kolbert.

• "The God Particle," a panel discussion about hunting the Higgs boson, will feature Brian Greene, a professor of physics and mathematics at Columbia University and the co-founder and director of the Institute for Strings, Cosmology, and Astroparticle Physics; Joseph Incan­dela, a scientist at the European Organization for Nuclear Research, or CERN, who announced the discovery of a subatomic particle strongly resembling the Standard Model Higgs boson last summer; Lawrence M. Krauss, a theoretical physicist and the inaugural director of the Origins Project at Arizona State University, which explores the origins of the universe, consciousness, and culture; and Lisa Randall, the Frank B. Baird, Jr., Professor of Science at Harvard University, where she studies theoretical particle physics and cosmology. The event will be moderated by Michael Specter.

• A live version of The New Yorker's Cartoon Caption Contest will be hosted by Robert Mankoff; Matthew Diffee, Carolita Johnson, and Liam Francis Walsh will judge the results. Cocktails will be served.