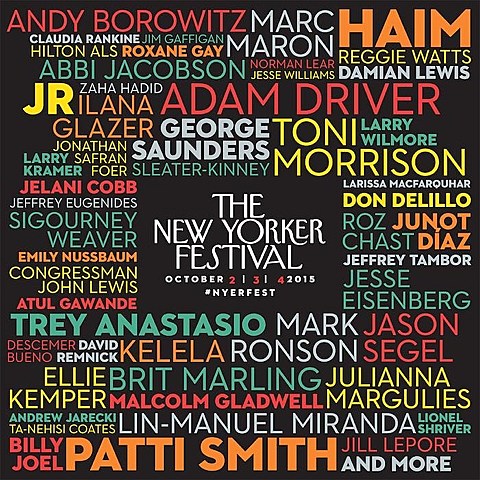 The New Yorker Festival returns this year from Friday, October 2 through Sunday, October 4. As always, "illustrious writers, creative thinkers, and artists from many disciplines will explore the cutting edge of culture, music, science, and technology." We've got a promo code -- NYERFEST20 -- to get 20% off tickets for select events, including the following:

Pop rock band Haim will give a talk with Kelefa Sanneh and an intimate performance on 10/21 at Gramercy Theatre at 7 PM (tickets).

Comedian/musician Reggie Watts talks with Emma Allen at One World Trade Center on 10/3 at 10 PM (tickets).

Genre-crossing producer Mark Ronson, who's bigger than ever now thanks to his Bruno Mars collaboration "Uptown Funk," talks with John Seabrook, whose book on pop music The Song Machine is out now, on 10/3 at Gramercy at 10 PM. Mark also performs with Jeff Bhasker, Miike Snow's Andrew Wyatt, Jay Bratten and Chris Vatalaro (tickets). It's his only live North American performance for the Uptown Special album cycle (his only others have been in TV studios).

One last coupon: use the code SOUNDCLOUD35 to get a discount for the Soundcloud Lounge event on 10/2 at One World Trade Center at 8 PM with performances from NYC electronic duo Blondes and Chance the Rapper associate Towkio. John Seabrook is at this one too, talking with Soundcloud founder and CEO Alexander Ljung (tickets).

Other events that there are no discounts for include Jim Gaffigan, Broad City, Trey Anastasio, Marc Maron, and Patti Smith. Check out the festival's calendar for even more.