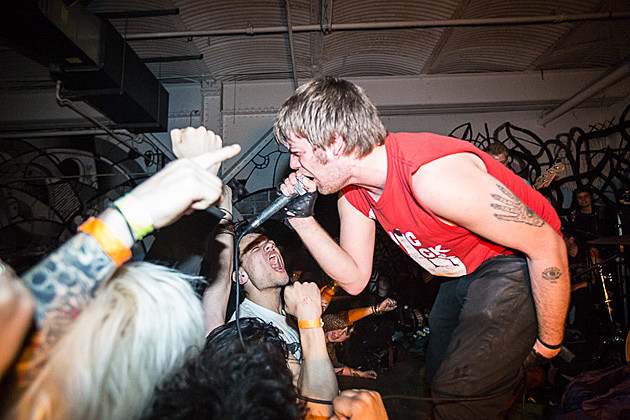 Punk and hardcore festival New York's Alright is back for a second year and will run at various venues around the city from Thursday April 17th to Sunday April 20th. The line-up (which includes several bands that played the fest last year) features solid locals like Anasazi, Dawn of Humans, Goosebumps, Crazy Spirit, Nomad, Warthog, La Misma, Hank Wood & the Hammerheads and some select imports like Wiccans, Infernöh, Omegas, No, and Stoic Violence, to name a few, making for a strong bill. Full lineup below.

Here's what the fest organizers said in their announcement:

No one thought we would be foolish enough to do it again, but here we are, "proud" to present New York's Alright 2014. This festival will be taking place Thursday, April 17th through Sunday, April 20th, at various venues around the friendly city of New York. We will be bringing together some of the best bands in contemporary DIY punk and hardcore from different parts of the world for your enjoyment.

Tickets go on sale on Valentine's Day, February 14---the same day the Acheron's D-fest kicks off in Mexico City. Love is very much in the air this year. Stay tuned to New York's Alright 2014's Facebook page for details on lineups and venues.

Several bands playing the fest have upcoming NYC shows even sooner. Goth punks Anasazi are teaming up with La Misma and Santa Ana's Damages on Friday (1/10) at Lulu's. The show is Damages' east coast tour kickoff and will also celebrate the release of a La Misma 7". All Damages dates are listed below, as well as a stream of their recent EP.

Sweden's Infernöh and Brooklyn's Nomad are teaming up for a tour before the fest, which includes a TBA Brooklyn show on April 12. Dates and an Infernöh stream below.

London's No and Long Beach's Stoic Violence will also be hitting the road together immediately after New York's Alright, which brings them back to NYC for a TBA Brooklyn show on May 1. Dates and streams below.

Pleasure Industry are also playing a hometown show at a TBA venue on February 8 with Asylum, Gowanus Mutant Kommandos and others TBA.

All lists of dates, streams, and the New York's Alright 2014 lineup, below...