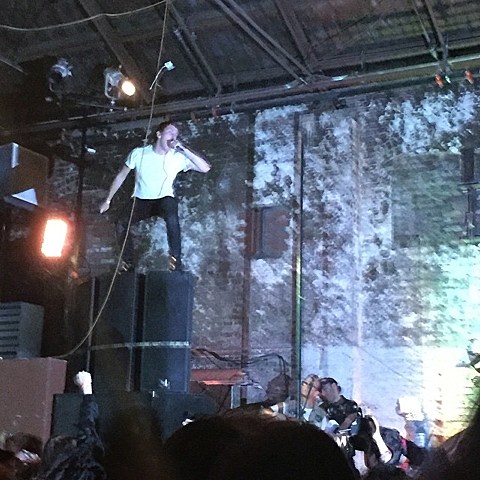 Multi-venue NYC punk festival New York's Alright went down this past weekend, beginning with an unofficial kickoff show on Thursday night (4/16) and running through yesterday's (4/19) all-day show at The Wick. Yesterday's show was the only one I caught, with wild locals Dawn of Humans, Austin's Glue, Tokyo's Raw Distractions, Austin's Impalers, Oslo's Urbanoia, and Toronto's Gaucho. The whole day was great, but as far as I was concerned the two Austin bands were the most memorable. Glue played a wild set that had their singer hurling himself into the crowd several times and climbing a tower of PA speakers (more on them and a stream of their recent s/t 7" here). Impalers may not have climbed speakers but they were definitely as towering.

Last year, Impalers followed their 2013 debut album with the Psychedelic Snutskallar EP (on 540 Records/Static Shock), which is five tracks of d-beaty hardcore with layers of noise and an extended guitar freakout that earn it the "psychedelic" title. Frontman Chris Ulsh (also of Power Trip, Hatred Surge and Mammoth Grinder) is a beast on this thing and he was at yesterday's show too. Download it (name your price) at bandcamp and stream it below. A video from their set is below too.

The rest of the festival had the US debut of UK '80s deathrock greats Part 1 (who play NYC again this week), Australia's Rule of Thirds (who everyone I talked to loved and I'm bummed I missed them -- listen here), Warhead, Warthog, Aspects of War, Kromosom, Isterismo, Anasazi, Pleasure Leftists, Institute, Sheer Mag (who put out a video today from their new EP on Katorga Works), and more.

Watch the new Sheer Mag video and stream their new EP, stream Impalers' EP, and check out more pictures and videos from NY's Alright (a few by unARTig), below...

•KRÖMOSOM• Love this band. Always crushing. Worked 3/4? of their NY shows, and bummed I missed the 4th.(cuz I was working of course)

•ISTERISMO• My view from the stage Friday nite. This is the beginning of their set, what I enjoy about this video is you can feel the energy building up. Sadly my phone was dead for ASPECTS OF WAR who delivered one of the best sets, and also one of my favorite sets of many this weekend. #newyorksalright

Part 1 set, part one. They were great! Can't wait to see them tomorrow for Part 1, part two. #newyorksalright

Take it where you can get it. #newyorksalright