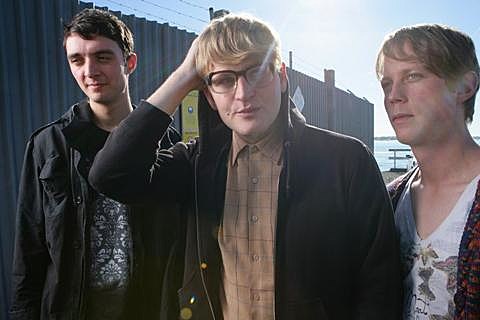 Like in past years, New Zealand is being represented at CMJ with a kickoff party at Le Poisson Rouge on October 16. The lineup includes Six60, Die! Die! Die!, Ghost Wave, Popstrangers, Lawrence Arabia and Tom Lark. That show is totally free to the public and will stream live at LPR's Concert Window beginning at 6 PM but you do need to RSVP (just email: Pamela@themusebox.net).

Noise punks Die! Die! Die!, who have recorded for a number of labels incuding Flying Nun, also play Death by Audio on October 17 with Roomrunner and a secret guest (not an official CMJ show). More CMJ shows for them will be announced soon. Their new album, Harmony, is due out November 9 via Golden Antenna. You can stream it in its entirety below.

Ghost Wave have a few other CMJ shows, including SESAC showcase at Cake Shop on October 17 with ZZZ's, Hussle Club, I.R.O.K., Punks on Mars, Pyschobuildings, Half Undressed, Communist Daughter, and Blessed Feathers (free); and the Flowerbooking showcase at Knitting Factory on October 19 with Unicorn Kid, Ki Theory, Devin, Talk Normal, and CIties Aviv.

In other New Zealand artists playing CMJ news, as mentioned, Gotye collaborator Kimbra plays Webster Hall on October 19 and 20 with The Stepkids. Both shows are sold out, some CMJ badges will be accepted on at the 10/19 show.

After CMJ, Opossom will be sticking around for more shows in NYC including the previousyl discussed show at Pianos (10/24) with Big Scary and Time Travelers and another at Cameo Gallery (10/26). Tickets for the Piano show and the Cameo show are available.

Some song stream and a video are below.