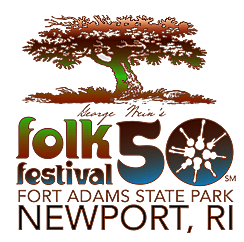 Pete Seeger, who is a cofounder of the Festival and who just celebrated his 90th birthday with a show at MSG, will be playing both nights. On Sunday, he'll be joined by Judy Collins, who is also performing a free Folks on the Island show Sunday, July 26th on NYC's Governors Island.

Saturday acts at the Fest include Billy Bragg and Tom Morello, who just shared a stage with Iggy Pop at NYC's Nokia Theatre, and the Decemberists, who have a big summer tour that's stopping at NYC's Radio City Music Hall on June 10th, Fleet Foxes, who have tour dates including All Points West, and the Avett Brothers, who are on tour and playing NYC's Irving Plaza on June 12th and 13th. Langhorne Slim will be there too (he's also at Lollapalooza this summer). Iron & Wine are playing both this, and ATP NY.

Sunday's show is heavy on big-name folkies with Collins (mentioned above), Joan Baez and Arlo Guthrie all performing. Arlo Guthrie is also playing a free show at Castle Clinton in NYC this summer.

Neko Case, playing Sunday, just did two nights at NYC's Nokia Theater and will be at All Points West, among other festivals.

Elvis Perkins in Dearland will be there. Perkins and Co. played the Bowery in March, and their summer tour includes a May 20th show at the Bell House in Brooklyn (tickets), and the Clearwater Festival (another project founded by Seeger) on June 20th and 21st in Croton-on Hudson, NY.

Also on Sunday is Deer Tick, whose big summer includes opening for Jenny Lewis at MHoW on June 9th, headlining the Bowery on July 24th (tickets go on sale Friday, May 8th at noon), and playing a free Celebrate Brooklyn show at Prospect Park on August 7th.

AUGUST 1 - 2, 2009 Celebrate five decades of folk music in Newport, RI, August 1 - 2 at George Wein's FOLK FESTIVAL 50. The 2009 festival, which takes over Fort Adams State Park from 11:30 am - 7:00 pm each day, will celebrate 50 years of rich history in Newport, where Pete Seeger and Joan Baez helped shape the course of American music. This summer, they return to usher in the next 50 years, performing alongside Judy Collins and Arlo Guthrie on a festival bill that also heralds folk music's bright, expansive future with sets by The Decemberists, Neko Case, Fleet Foxes, Gillian Welch, The Avett Brothers, Iron & Wine, Ben Kweller and many more.

Since 1959, George Wein has been presenting the very best of Americana, blues, roots, gospel, country, Cajun, bluegrass, and traditional folk music in scenic Newport. FOLK FESTIVAL 50 is proud to present tributes to festival co-founder Pete Seeger on both Fort Adams days and a special set on Sunday featuring Joan Baez, who made her Newport debut in 1959.

Other festival highlights include sets by Billy Bragg and Tom Morello: The Nightwatchman, who continue in folk's great tradition of political songwriting. The Campbell Brothers infuse some sacred steel music into Sunday's program, while Tim Eriksen leads a new generation of Shape Note Singers in traditional hymns. The Decemberists combine the energy of rock with the craft of great storytellers, and Neko Case, Guy Clark, Gillian Welch, Elvis Perkins, Josh Ritter and Brett Dennen carry on the festival's long-time history of powerful songwriting. The Avett Brothers bring a rollicking new twist to bluegrass and country roots, and Mavis Staples will take festival-goers to the place where R&B meets gospel. With blues from Ben Kweller, bluegrass from Del McCoury, Cajun from Balfa Toujours, alt-country from guitar master David Rawlings and the down-home sounds of Tao Rodriguez Seeger, this year's lineup draws from the many musical styles that have found a home in Newport over the years.

TICKETS & OTHER INFORMATION
Tickets for George Wein's FOLK FESTIVAL 50 at Fort Adams State Park go on sale Wednesday, May 6, at 10:00 AM on-line at www.folkfestival50.com, by phone at (800) 514-3849 and by mail. General admission tickets also can be purchased in person at the Visitor's Center at the Newport County Convention & Visitor's Bureau located at 23 America's Cup Avenue in Newport. General Admission seating is first-come first-serve on the lawn. Patrons may bring blankets and low-backed beach chairs. General Admission: Adult: $69.00 in advance, $75.00 on festival weekend, if available.

Parking: Children 3-15: $15.00 each day at all times; under 3, free. Adult Two-Day Passes: A limited number of two-day passes good for admission Saturday and Sunday will be available for $125.00 while they last.

Service Charges: Per ticket service charges apply to all tickets purchased on-line or by phone and there is an additional per order charge for phone orders. There is a $4.00 handling charge per order for tickets ordered by mail.

In Rhode Island: General Admission tickets can be purchased in person at the Visitor's Center at the Newport County Convention Center & Visitor's Bureau at 23 America's Cup Ave. No service charges apply. Visit www.gonewport.com for ticket office hours and general information.

Festival Office: There will be a festival office in the Newport area where tickets can be purchased in person at a later date and tickets can also be purchased at the gate, if available. For general information, craft vendor information or to leave a message for festival staff, call the festival hotline at (401) 848-5055.

By Mail: To order tickets by mail, send a note specifying the number of tickets you wish to order for each event and include a phone number where you can be reached. Include your address and credit card information (with expiration date and CVC Code from back of card), check or money order plus $4.00 per order for postage and handling to: George Wein's Folk Festival 50, PO BOX 3865, Newport, RI 02840.