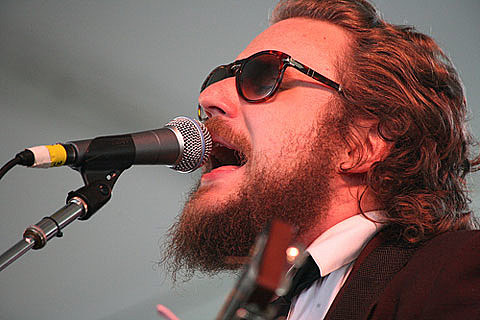 ""I've always dreamed of playing at the Newport Folk Festival," Steve Martin said Friday night, "and tonight I am one step closer to that goal."

He was joking, of course -- the famous funny man was at George Wein's Newport Folk Festival, headlining the opening-night bluegrass concert at the International Tennis Hall of Fame before an estimated crowd of 2,300 people. But throughout his set fronting the North Carolina quintet The Steep Canyon Rangers, Martin's serious talent on the banjo was evident." [The Providence Journal]

Steve Martin played the opening night show. Saturday's sets included Sarah Jarosz, The Low Anthem, Nneka, Blitzen Trapper, Yim Yames (Jim James of My Morning Jacket) (Ben Sollee and Daniel Martin Moore joined him on stage too), Andrew Bird, O'Death (now back in action), and John Prine. I listed those because those are the ones NPR taped and have archived for streaming. Today's sets include Cory Chisel, Sharon Jones And The Dap-Kings, A.A. Bondy, Preservation Hall Jazz Band, Punch Brothers, featuring Chris Thile, The Avett Brothers, Horse Feathers, and Edward Sharpe And The Magnetic Zeros. I mention those because those are the ones NPR is streaming live today (and will also archive for future listening). Elvis Perkins and Dearland also play today, instead of Justin Townes Earle.

Some videos from the fest so far, especially of What Cheer? Brigade, below...

What Cheer? Brigade at Newport 2010