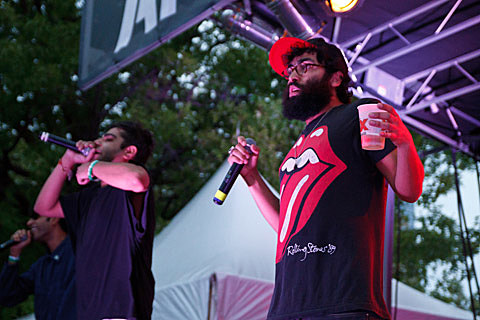 Fool's Gold Records co-founder Nick Catchdubs has never actually put out a full-length solo album, but that will change on April 28 when he releases Smoke Machine. First single "Full House" features two regulars of NYC's rap scene, Troy Ave and ex-Das Racist member Heems. Troy sounds even more like 50 Cent than he usually does (not in a bad way), and Heems pulls one of his characteristically wacked-out verses. IAMSU!, Jay Ant, and B.I.C. (Bitches Is Crazy) appear on the album too. Listen to "Full House" below.

As previously mentioned, Heems has a debut album of his own coming out on March 10. His release show at Santos Party House also happens that day with Sandunes and Rizzla. Tickets are still available.

Heems' former Das Racist groupmate Kool A.D. also recently announced a Santos show. His is April 30 with Lakutis opening. Tickets are on sale now. His only other date as of now is a few days later in Philly at Kung Fu Necktie (5/3) (tickets).