...to talk about The Death of Bunny Munro 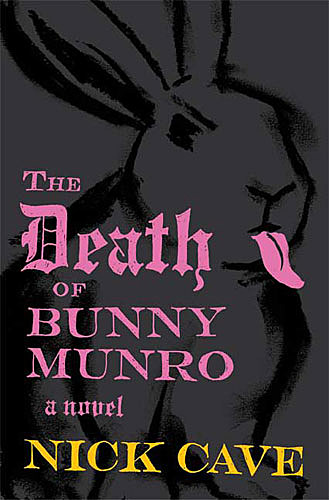 "The lead singer of the Birthday Party, the Bad Seeds, and Grinderman, Nick Cave has been performing music for more than thirty years. His album Murder Ballads has sold close to one million copies. In addition to his previous novel, he has authored King Ink, a collection of lyrics and poetry, and the screenplay and score for the film The Proposition. He recently composed the soundtrack for the film adaptation of Cormac McCarthy's The Road. Born in Australia, Cave now lives in Brighton, England."
[Barnes & Noble, Union Square, NYC - September 14, 2009]

Regina Spektor, who also has a show coming up at Radio City, is appearing at the same book store in August.

Nick Cave and Warren Ellis have been creating music together for more than fifteen years, with The Bad Seeds, Grinderman and The Dirty Three. More recently, they have collaborated on soundtracks for such films as The Proposition (2005) and The Assassination of Jesse James by the Coward Robert Ford (2007). White Lunar, a two CD set to be released by Mute on September 22, 2009, contains music they composed from the aforementioned films, along with a selection of their cinematic scores, including rare and previously unavailable material.

Dirty Three are playing ATP NY, Bowery Ballroom, and other places in September.

Arctic Monkeys played a Nick Cave cover at Highline Ballroom last night. An official video of them doing that, a video of Nick reading from the book, and the track breakdown for the Nick & Warren CD, below...

Nick Cave reads chapter 3 of The Death Of Bunny Munro.

The Proposition - The Rider Song

CD1 Tracks 12-17: from The Road
Soundtrack by Nick Cave & Warren Ellis.
Directed by John Hillcoat. Based on the book by Cormac MacCarthy

CD2 Tracks 4-5 & 13-14: from The Vaults
These tracks are from the Cave/Ellis vaults/archives

Nick Cave reads chapter 12 of The Death Of Bunny Munro