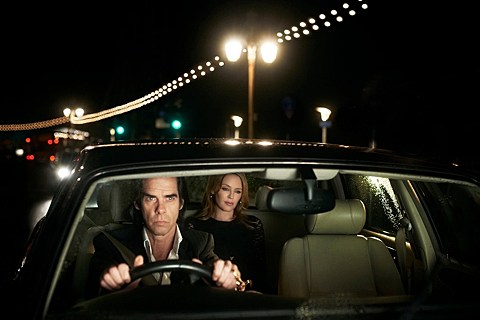 What sets 20,000 Days... apart from most documentaries is that it doesn't follow the usual linear and chronological narrative; it instead it opts to jump around -- quite often -- blurring the lines between fiction and reality. In the film, Cave himself says that writing and creating stories is about throwing together two of the most unlikely things, and seeing what happens. That train of thought forms the basis of his songwriting technique, as well as the entire film's concept. It contains scenes in which Cave has conversations in his car with friends, friends who disappear as abruptly as they appear, leaving him driving quietly alone. Were these conversations scripted within Cave's mind, or were they real? Scenes like this are scattered throughout the film and kept me constantly intrigued. [BV Chicago]

20,000 Days on Earth, Iain Forsyth and Jane Pollard's new film of which Nick Cave is the subject, recently screened at Chicago's CIMM Fest (check out an excerpt of Milos Markicevic's review on BV Chicago above and read the whole thing here) and now it's set to screen at multiple North American cities in conjunction with Nick Cave & the Bad Seeds' upcoming tour.

In NYC, the film screens on August 4 at Florence Gould Hall Theater at The French Institute. At that date, and a select few others, Nick Cave will be there for a conversation and solo performance. All screening dates are listed below.

The Bad Seeds tour hits NYC soon before that on July 26 at Prospect Park and July 27 at Hammerstein Ballroom with Nicole Atkins on both dates, and Devendra Banhart also on night 1. Tickets for both shows are still available.

* with conversation and solo performance from Nick Cave