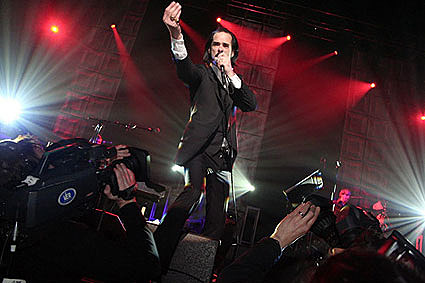 Nick Cave played an awesome 45-60 minute set to an appreciative crowd at Terminal 5 last night. Most people were clearly there to see Nick. The rest of the Plug Awards didn't have as much energy - really wasn't that exciting, but it wasn't that bad either.....at least I thought so.....

cave played nine songs, six from the new album. the bad seeds set was awesome. the rest of the show, like someone said earlier, was "awkward and pointless". [anonymous]

I thought it all went pretty fast for what it was. Unlike previous years, they sped right through things - no weird skits or iPod battles. In fact, maybe they sped through it too much. I got there about 20 minutes late and it was hard for me to hear what they were saying on stage a lot so I may have missed it, but I was waiting for Patton Oswalt to tell a joke all night. Instead he basically just read off cards, introduced who was next, and kept things moving along. Of course I was happy to see St. Vincent, Dizzee Rascal, Jose Gonzalez and the Forms, but their sets were only 2-3 songs long (not that I expected them to be longer).

Strangely Animal Collective beat The National for "Best Indie Album", but The National did win "Best Song" - which they were there to accept. Arcade Fire won "Best Album" (a different category than "Indie Album"). Stereogum won best blog, Pitchfork won best website for the 2nd year in a row, and Blog Radio on Sirius (that I am a part of) won "Best Specialty Radio Show" (thanks!) for the 2nd year in a row. Justice won "Best New Artist" and I think Hot Chip won best DJ album. Other awards I can remember went to Bowery Ballroom for best venue, Other Music for best store, and Coachella for best festival. I'll list them all out below when they publish a list. 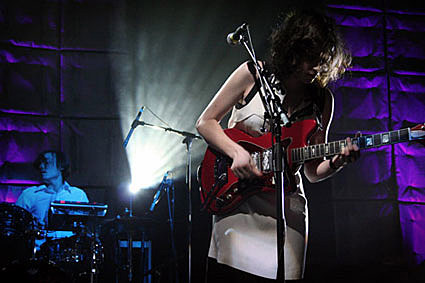