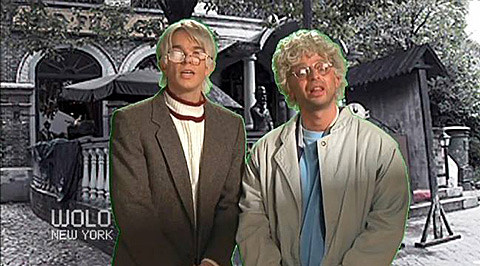 There's a few cool comedy-related talks and events happening soon at 92Y. On January 20, Nick Kroll will host a screening of The Kroll Show Season 3 premiere, and following that there will be a Q&A with the show's divorcees Gil Faizon (Kroll) and George St. Geegland (John Mulaney). This is sold out but you can stream it live on via 92Y's website. Watch the Season 3 trailer below.

Keeping with the TV theme, there's a Better Call Saul panel discussion on February 5 featuring stars Bob Odenkirk, Jonathan Banks and Michael McKean. Tickets are still available (they're cheap if you're 35 and under) and this will also be streaming on 92Y's site. Better Call Saul premieres February 8 on AMC. A new trailer is below.

Elsewhere at 92Y, Judy Gold has an ongoing series called 'Comedy Gold' where she talks with famous funny people. On January 27 it's with Jim Gaffigan (tickets) and on February 16 she'll be talking to Wanda Sykes (tickets).

And finally, Allison Williams of HBO's Girls will be talking with her friend and Late Night host Seth Meyers on February 18. (tickets) Maybe Seth will ask Allison what her father, NBC News anchor Brian Williams, thought about her first scene in Girls' just-aired season premiere.