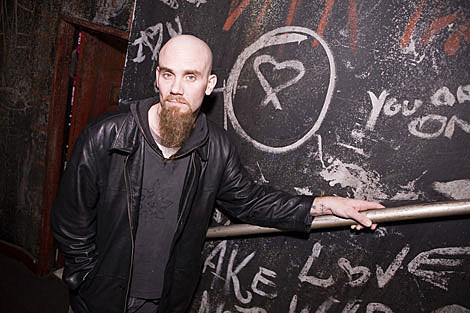 Nick Oliveri, of Mondo Generator, The Dwarves, and former bass player for Queens Of The Stone Age and Kyuss, put out a collection of home-recorded songs, Death Acoustic (Impedance Records), in October '09. He's touring the US with that material (which includes covers of past projects Queens & Dwarves as well as Raw Power, GG Allin and more) this January and February. The acoustic tunes come to Pianos on Saturday, January 23rd, where he'll be joined by acoustic versions of heavy Brooklyn bands Goes Cube and Weird Owl. Tickets are on sale.

Video of Oliveri doing his acoustic thing and joking about his solo project and Queens of the Stone Age ("No one can fire me anymore!") and all tour dates are below...