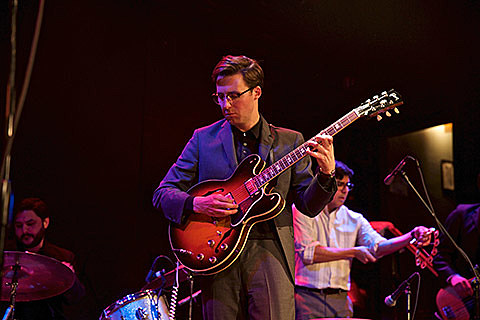 Brooklyn Night Bazaar is part of Northside Festival this year, offering cool shows next weekend. Unlike most BKNB shows, however, they are not free. Friday, June 13 is classic R&B lover Nick Waterhouse, plus The Vandelles and DJ Jonathan Toubin. The Saturday (6/14) BKNB Northside show is headlined by Baths with the rest of the lineup TBA. And, as posted already, Sunday (6/15) it's Watain and Kosmodemonic.

Tickets for all three BKNB shows during Northside are on sale now.

This weekend's shows at BKNB are curated by Gorilla Vs Bear / Forest Family with Friday (6/6) being a strong lineup of Ejecta, Lee Bannon, Dent May, and Braveyoung with Bravves and Weekend's Shaun Durkan as DJs; then on Saturday (6/7) it's Diana, and a "Secret Super Special Guest Performance." Any guesses? Those shows are free and all ages.