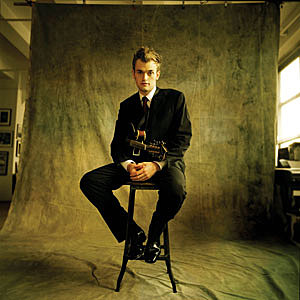 After honing his skills at numerous small Living Room shows over the past year, Chris Thile from Nickel Creek has graduated quickly to headliner of NYC's much larger Bowery Ballroom (one of the best venues in the country according to David Bazan). That show is tonight (August 29, 2006), and its not yet sold out. Catch him now, or wait until March 17, 2007 when he plays CARNEGIE HALL (like Devendra).

After seven years of extensive touring in support of three records (seventeen years as a band), we've decided to take a break of indefinite length at the end of 2007 to preserve the environment we've sought so hard to create and to pursue other interests. It has been a pleasure to write, record, and perform for you through the years and we'd like to heartily thank you for your invaluable contribution to our musical lives.

Chris Thile covers Gillian Welch, The White Stripes and The Strokes on his new album called How to Grow a Woman from the Ground. Its streaming here (thx J).

The Strokes' Albert Hammond Jr. has solo songs streaming at his MySpace too.

All Chris Thile tour dates below...

PRESS RELEASE
CHRIS THILE, HOW TO GROW A WOMAN FROM THE GROUND
SEPTEMBER 12, 2006

"There are few musicians with as much talent and drive as CHRIS THILE."-ACOUSTIC GUITAR

"THILE has both the chops and the vision to alter the landscape of his genre forever."-USA TODAY

HOW TO GROW A WOMAN FROM THE GROUND is the sound of a brilliant musician stretching out to reach new things-but also returning to the source that originally inspired his amazing talents. In the process, CHRIS THILE gathered together some of the hottest young players out there-Chris Eldridge, Greg Garrison, Noam Pikelny, and Gabe Witcher-for a spirited run through tracks new and old.

For his latest album, HOW TO GROW A WOMAN FROM THE GROUND, THILE decided to record the project live to two-track tape in order capture the energy of bluegrass as it originally evolved. Little separation. Almost no compression. The communal feel of bluegrass that embodies raw energy and subtle harmonies expressing emotion without artifice.

In some ways HOW TO GROW A WOMAN FROM THE GROUND is a point of departure. A reconciliation of origin and experience. A musical exploration refreshed ... and begun anew.

· Chris Thile is a member of the Grammy®-winning acoustic trio Nickel Creek, which has sold 1.5 million records and was named one of Time Magazine's "Music Innovators for the New Millennium."

· Includes songs by The White Stripes ("Dead Leaves And The Dirty Ground"), Gillian Welch ("Wayside/Back In"), Tom Brosseau ("How To Grow a Woman From the Ground"), Jimmie Rodgers ("Brakeman's Blues"), The Strokes ("Heart in a Cage"), and more, including Chris Thile original songs and brilliant instrumentals-hearkening his landmark album NOT ALL WHO WANDER ARE LOST.

TRACK LISTING
Watch 'at Breakdown
Dead Leaves and the Dirty Ground
Stay Away
O Santo De Polvora
Wayside/Back In Time
You're an Angel, and I'm Gonna Cry
How To Grow a Woman From the Ground
The Beekeeper
If the Sea Was Whiskey
Brakeman's Blues
Cazadero
Heart in a Cage
I'm Yours If You Want Me
The Eleventh Reel