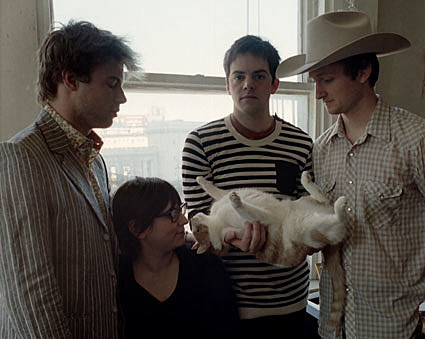 Fellow Vermont-to-New York transplants Nico Muhly, Thomas Bartlett (aka Doveman), and Sam Amidon like to make music together: They have appeared in each other's shows, played on each other's records, and now they're going to grab a friend (such as Oren Bloedow) or two (such as Oren Bloedow and Nadia Sirota), pile into a van, and head off on tour. The performances will feature music from each of the three of them, as well as some sneak previews of future collaborative schemes. Sam will perform a set of folk ballads interspersed with the occasional Melville reading and some liturgical dance, accompanied by Thomas with guest plinks by Nico. The microphone will then be passed to Thomas, who will whisper some lamp-rock, gently expiring into the microphone, while Sam, Nico, and Oren strum and plink and tap and generally try to liven things up. Finally, Nico will perform a selection of his compositions, with help from Sam, Thomas, Oren, and favored drinking buddy and violist extraordinaire Nadia, culminating in "The Only Tune," a piece that Nico wrote for Sam, and that he, Sam, Thomas, and Nadia premiered last year at Carnegie Hall.

I love this tour and I just realized I didn't post the dates here before they started the tour in Seattle on August 14th (oops). At least the NYC show didn't happen yet (not to mention MD, PA, MA, Montreal & Toronto & Chicago). NYC is August 23rd at (le) poisson rouge and tickets are on sale.

Doveman covered the Footloose soundtrack (and received a cease and desist for doing so). Nico Muhly has been working with Antony. Doveman (Thomas) is also touring with Antony (as a band member I think). All dates below...