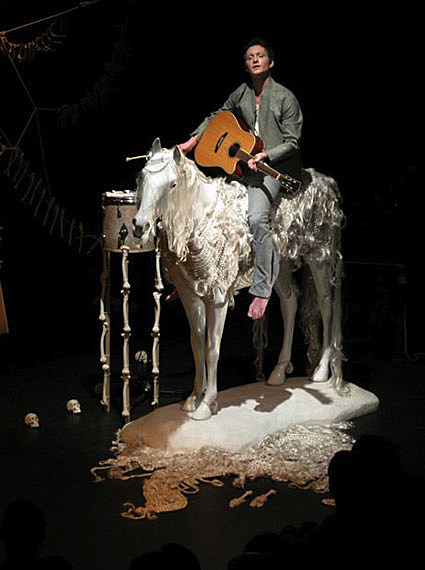 The other advantage of a deliberate mispronunciation is that it can be subtly dismissive of a topic that you, the Mispronouncer, are somehow ashamed to admit to knowing too much about. One time I have caught myself doing this is with the artist M.I.A., whom everybody had been talking about in, like, 2003. So as not to appear deliberately branché (BRAHN-shay) about her music, I caught myself talking about her like, "Oh, I was just listening to...how do you say it, is it Miyya? Emm Eye Ay?" and of course, it's an asshole move, and it slows the pace of conversation. I heard myself do it, and vowed never to do it again. [Nico Muhly - on his blog]

Info on a new Nico Muhly record (coming out on the record label part owned by members of the National) below...

The 26 year old composer Nico Muhly was born in Vermont in 1981 and graduated from Columbia University in 2003 with a degree in English Literature, receiving a Masters in Music from the Juilliard School one year later. Since then, he has amassed a string of commissions, collaborations, and premieres that would be notable for a composer twice his age. The Boston Pops, the BBC, American Ballet Theater (for choreographer Benjamin Millepied), the New York Public Library, Whitney Museum and even a debut at Carnegie Hall are a few of his many US and international premieres. More intriguing to pop listeners is Muhly's extensive work with Philip Glass as editor, keyboardist, and conductor for numerous film and stage projects, as well as his contributions to projects by a striking constellation of pop figures, among them Rufus Wainwright, Antony (of Antony and the Johnsons), Björk, Teitur, Will Oldham, and The National.

These connections highlight the most important aspect of Muhly's musical life - in a word, community. The cast of characters who appear on Mothertongue include his closest collaborators -- violist Nadia Sirota, folk singer Sam Amidon and Icelandic producer Valgeir Sigurðsson. Sigurðsson's and Muhly's view on musical relationships was, in part, the inspiration for Bedroom Community, the label Sigurðsson founded and which created both Mothertongue and its predecessor, Speaks Volumes, Muhly's 2006 debut.

Classical music can be a daunting exercise for those unfamiliar with the genre. Luckily, Nico Muhly prizes communication -- both in day-to-day life (note his frequently updated blog at nicomuhly.com) and in his music. It's this sensibility which has inspired the titles of both his records. Mothertongue, in particular, sounds like the product of someone in love with language. Voices are treated as exquisite instruments. (The click of the teeth, the tap of the tongue, the smack of the lips, et. cetera.) The music itself speaks to deeper meanings and specific ideas and emotions.

Brassland, the North American licensee for Mothertongue, will be releasing the album on July 22nd, 2008. Nico Muhly will be touring in support of this release.