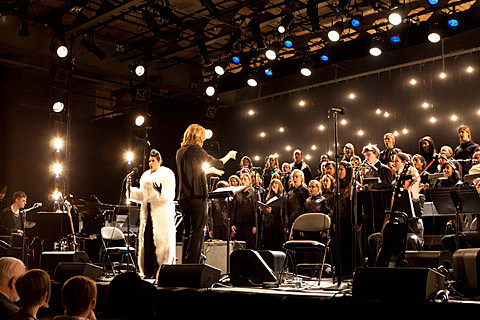 At Friday's performance, Nico Muhly warned early on that Tell the Way--a loosely tied together collection of 11 songs--would be a "casual sort of thing." He was right, for the most part; its compositions skirted around the unifying theme of travel in a range of styles: Sam Amidon's traditional folk songs; Bishi's eclectic, musical-theater-inspired chansons; the ever-busy Bryce Dessner's slow-building "Tour Eiffel," with dramatic vocal swoops that mimicked its subject; and Nico's unifying arrangements and short compositions. The voices of the Brooklyn Youth Chorus brought the works together in a brief 65-minute program, which moved quickly and offered small treats along the way (the three-night run at St. Ann's Warehouse finishes tonight, and a few tickets are still on sale).

More than any thematic thread, the Brooklyn Youth Chorus gave the evening consistency, as did ACME, who performed as a string quartet with a trombonist and a percussionist attached. The two groups had fun with the material, especially Muhly's pieces, which he composed with inspiration from historical texts (The Book of Common Prayer, and the travel writings of Sir John Mandeville) and commissioned texts (like the humorous, bite-sized "A Korean Girl," by writer Mary HK Choi, which inspired giggles at the appropriate moments).

Each composer brought what was basically their signature dish, with the wild card being Bishi, a British singer who I knew nothing about before the show, other than that she played the sitar. The sitar was the least of her contributions, the foremost of which was sheer stage presence. Her compositions--and her entrances, first in a coat of white fur (fake we hope) with hair done up like a Cinnabon, then in a black-and-white corset and skin-tight pants--added some danger and surprise to the program.

Bishi's singing was similarly attention-grabbing: a cabaret-style coo that blended with and added depth to the chorus (where someone like Sam Amidon sounded distinct and other). The theatricality of a musical pulsed through the songs, with Bishi as the preening lead. "Look the Other Way," her second number, progressed with a martial beat before delivering a string of awesomely WTF moments: a synthesized disco beat, then a man in white-tie formal-wear adding Vincent Price-esque narration, and finally a heavy metal breakdown with crushing drums and Bryce Dessner shredding away. Of course, it was also delivered with a wink. "That's probably the most metal guitar Bryce has played since high school," said Nico, of the best part of the evening.

A few more pictures from the show are below... 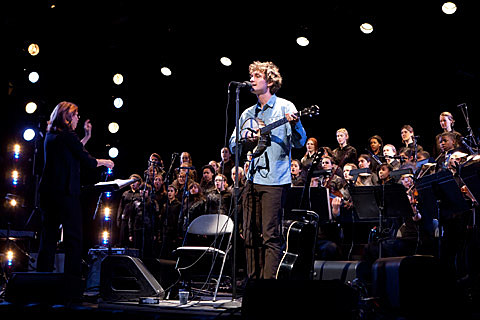 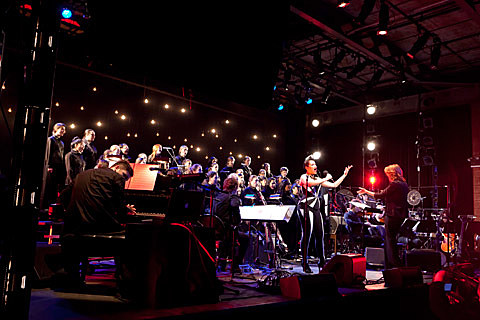 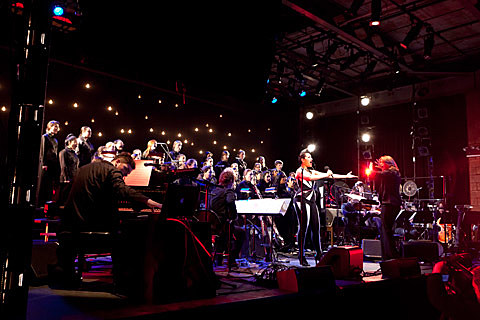 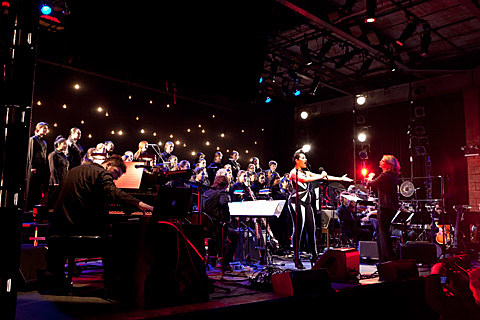 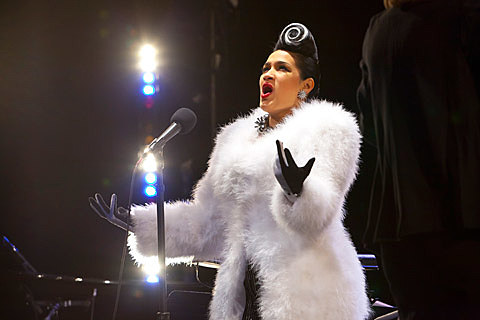 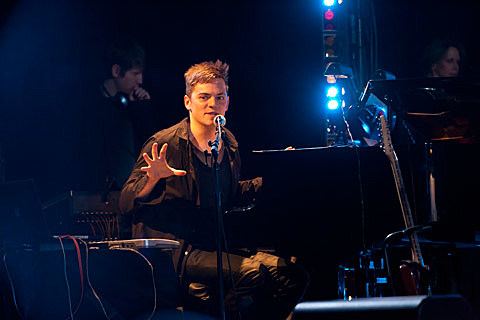 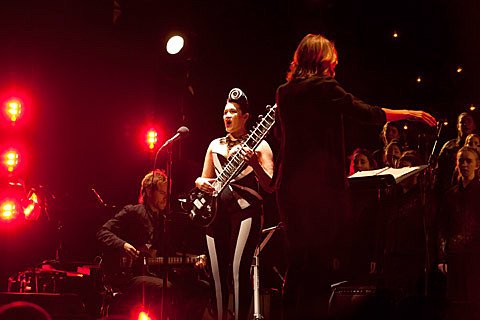