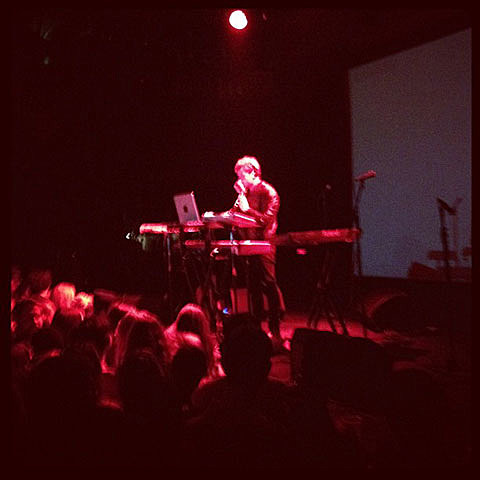 Nicolas Jaar walked on stage just minutes before midnight at the sold out Clown & Sunset showcase at Music Hall of Williamsburg last night (2/3) after opening sets by Pavla + Noura, Valentin Stip, and Acid Pauli. He stood surrounded by keyboards and straddling a vintage style microphone in front of a backdrop of slowly drifting images of nature and architecture. The set began with some heavily blurred vocals and swirling atmospheres, but much of what was to follow was pretty unexpected.

After pushing his mic to the side (which he did after about two songs), Nico hit his highest points when he dropped bass-heavy beats, all of which were met with huge applause from the crowd, but lost sight of what made his album, Space Is Only Noise, so appealing. Save for a few memorable piano hooks, the minimal textures and Nico's own distinct voice that set him apart from other dance musicians took a backseat for more straightforward beatwork. It wasn't until a bit more than halfway through the set, when he was joined on stage by collaborators Will Epstein and Dave Harrington, that the show became something entirely of its own. Epstein's meandering sax lines and Harrington's prog rock guitar turned the show into dancefloor-ready experimental rock, and their ability to do that is ultimately the most attractive thing about bringing Nicolas Jaar's music into a live setting. They ended their pre-encore set with the clear highlight of the night, "Space Is Only Noise If You Can See," which saw Nico grabbing a more modern mic with way less effects on it and discernibly delivering his stark baritone vocals.

The full band returned for an encore, bringing out guest vocalist Sasha Spielberg to sing lead on a track, which ended up being another highlight of the show, and Nico rounded things off with a few more dance tracks.

You can catch Nicolas Jaar, along with Will Epstein, Dave Harrington, and Sasha Spielberg at MoMA PS1 on Sunday (2/5), when he premieres a five-hour multidisciplinary piece as part of PS1's "Sunday Sessions". The event is free with admission to PS1.

He also recently dropped an unofficial video for "Materials," directed by Pondr, which you can watch below...