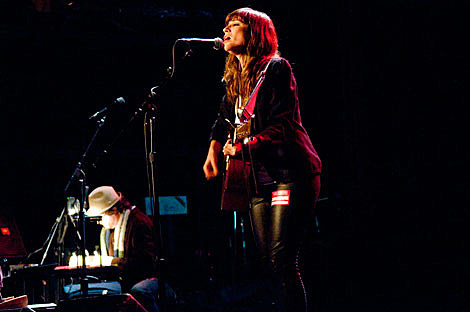 2) Roky Erickson with Okkervil River: I missed them last time I was at sxsw. I love both of these guys music so seeing them together I'm sure is going to be unreal!

3) Band of Horses: Yep, I missed the boat on these guys and have only recently discovered them. I have been listening to their last record on repeat for two weeks now.

And as previously mentioned, you can see Nicole Atkins perform tonight, Friday, March 12th at City Winery in NYC with Joseph Arthur, as part of his weekly Friday residency at the venue. Limited tickets are still on sale.

Then, on March 26th she'll be playing the first show at OHM, a new private show space in the lobby of a NYC high-rise in Chelsea...

OHM is a 37-story rental tower located at 312 11th Avenue in the West Chelsea district. There is over 25,000 square feet of amenity space in the tower, including the lobby which holds an intimate performance space. Knitting Factory Entertainment will be exclusively bringing live entertainment to this space.

The show is only open to residents of the building and their guests however. "The concept is to create an extremely intimate environment where artists can connect with a built-in crowd eager to participate in a unique experience."