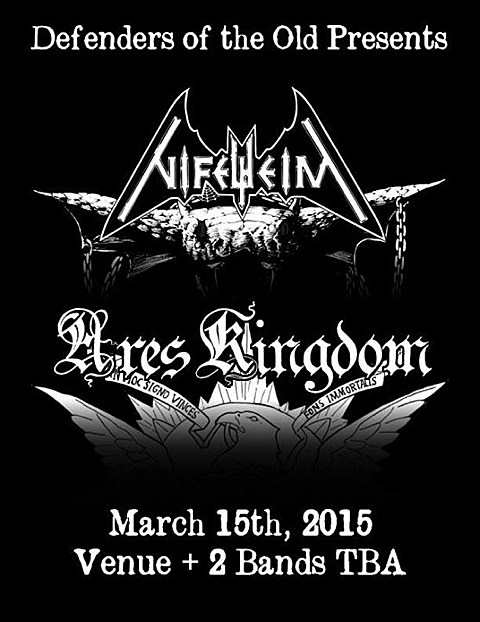 Metal festival Defenders of the Old Fest will take place in NYC on March 13 & 14 at The Bell House with Riot V, Machine of War, Exciter, Aggression, Brocas Helm, High Spirits, Natur and more. Tickets, including 2-day and single-day passes, are on sale now. Full lineup below.

In even more exciting news, the fest is presenting another NYC show the following day (3/15) at a TBA venue with Sweden's Nifelheim and Kansas City's Ares Kingdom (ex-Order from Chaos). Nifelheim are a legendary, utterly scuzzy and thrashy black metal crew who have been doing it since 1990, and Ares Kingdom are a veteran death/thrash outfit. While these two bands don't have locality or subgenre in common, they share a gnarled, old-school approach to ripping people's faces off. The show will feature a couple more bands who have not yet been announced, but given the headliners alone this should be huge. We'll keep you posted with further venue, ticket, and band info as that comes in.

Check out live videos of Nifelheim and Ares Kingdom, with the Bell House lineups, below...