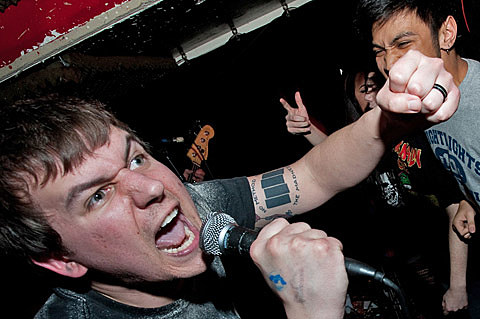 Brian of Night Birds has given us his ten coolest things in 2011, which includes shouts to Omegas, Career Suicide (mems of Fucked Up), Weird Al, and much more. Check that out below.

Night Birds play Tommy's Tavern TONIGHT (12/9) with Manipulation, Sickoids and Crazy Spirit, one of TWO NYC dates scheduled before the end of the year (the other with Citizens Arrest). The party kicks off at 8PM.

1. Weird Al's "Alpocalypse"... Is it the best Weird Al record? No, not by a long shot. Did I still go see them three times on this tour? Oh hell yes I did. Will I see them every time they play my town till I die? You know it, baby. "He who's tired of Weird Al is tired of life."

2. Omegas from Canada put out the best hardcore record of 2011, hands down, with their 12" debut, "Blasts of Lunacy".. Saw them 5 times this year and each set was better then the last. Intensity of the Abused with Dead Boys esq snot quality.

4. Tear it Up reunited for a pair of shows back in March, and while reunion gigs are generally not my thing this turned out to be a great weekend. Lots of oddballs turned out, a bunch of great bands played, and a bitchin time was had by all.

5. Career Suicide's "Cherry Beach" 7" on Dirtnap... Maybe the best song by my favorite band of the 2000's with killer B sides... Granted the original pressing came out in 2010, the artwork and amazing re recording is enough to make it to my top of 2011 list.

6. Government Warning's last show in Richmond, VA... Sad to see them go, one of the best, most energetic, eruptive punk bands of the 2000's but went out with a bang. (pictures from the final NYC shows)

7. Terrible Feelings from Malmo, Sweden put out a string of 7"s this year and have been playing shows like crazy. I got to see them on Night Birds tour in Bremen, Germany and they great. Gloomy, melodic punk with X like Male / Female dual vocals.

8. Nuclear Santa Claust 7" on Don Giovanni... three drunk weirdos move from Cleveland, Ohio to Brooklyn, NY and start a band that sounds like the Pagans meets the Spits. Sound perfect? It is!

9. Black Wine released their 2nd LP this year, "Summer of Indifference" on Don Giovanni Records, and while it took a little while to grow on me there are some great tunes on it. My favorite guitar performance of 2011 easily goes to Mr. Jeff Schroeck.

10. New Jersey finally having a punk scene with local bands I want to see after years of being bored to death. Phibes, Loose Ends, Altered Boys, Artificial Limbs, Secret Police, to name a few...
--