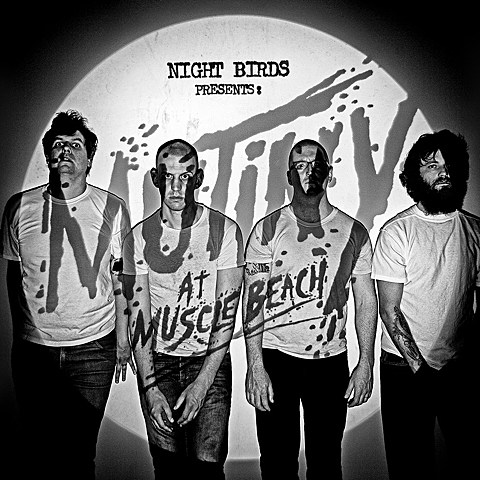 Night Birds recently announced that they'll follow 2013's Born To Die In Suburbia with their third album, Mutiny at Muscle Beach, on October 2 via Fat Wreck Chords. Going by lead single "Blank Eyes," it looks like Night Birds haven't changed their sound at all. But when you do it this well, that's totally fine. NB are somewhere between the kind of skate punk Fat was known for in the '90s and Dead Kennedys' more maniacal, surfier sound, and "Blank Eyes" rips just as hard as this kind of stuff needs to. Check it out below (via Nerdist).

As previously discussed, the band is heading out on tour with the great Dillinger Four, including two NYC shows. Those happen October 10 at MHOW (tickets) and October 11 at Saint Vitus (sold out). Those shows got even better since we last spoke, with Big Eyes being added. And there's still one more TBA for Vitus.

Catch Big Eyes sooner when they open for Against Me! at the BrooklynVegan-curated Red Bull Sound Select show on September 4 at The Stone Pony. Also on that bill is Cakes Da Killa. $3 RSVP is still open.

After that, Big Eyes play Silent Barn with Wet Nurse (9/22) and a stacked FREE afternoon show at Riis Park Beach Bazaar on September 27 with The So So Glos, Nude Beach, Mannequin Pussy, Bueno and Bikini Carwash. Noon start.

Listen to that new Night Birds song, with their list of dates, below...