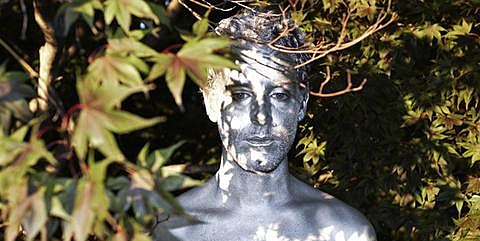 Nightlands is the project of Dave Hartley, who has played as a sideman in The War on Drugs and with Sharon Van Etten, and they'll release their sophomore album, Oak Island, on January 22 via Secretly Canadian. The first single, "So Far So Long," is an effect-laden folky cut that fits right in with the other projects Dave has been involved in. You can stream that track and check out the album's cover art and tracklist below.

Nightlands hails from Philly and they'll be making their way over to Brooklyn this week for a show at Glasslands on Thursday (11/29), where he made his live debut almost two years ago. Nightlands will be supported by Eastern Midwestern and Eliza Hardy Jones. Tickets for that show are available. Their only other announced date is a hometown show next week/month.

A list of all dates, song stream, cover art and tracklist are below.

Nightlands - "So Far So Long"

Oak Island Tracklist:
Time & Peace
So Far So Long
You're My Baby
Nico
So It Goes
Born To Love
I Fell In Love With a Feeling
Rolling Down The Hill
Other Peoples Pockets
Looking For Rain