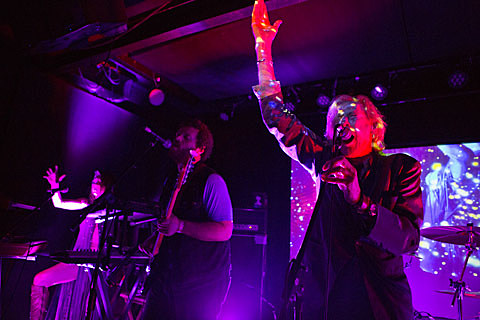 Ex-Hawkwind sax/flutist/vocalist Nik Turner, the Mighty Thunder Rider, will return to North America as Nik Turner's Hawkwind Space Ritual in late August with stoner rockers Witch Mountain and modern Kosmische head-trip Hedersleben. Nik will again be backed by Hedersleben, who previously provided band support in 2013. The tour gets rolling August 26 in Oakland and ends in Portland, Oregon on September 28.The silver machine will descend on New York City's Webster Hall (Marlin Room) on September 11 with local experimentalists Tonstartssbandht as an additional opener. Tickets are available now.

By the time the tour is in full swing, Witch Mountain should have their new album, Mobile of Angels, out in the world. The release is expecting to hit stores in September through Profound Lore Records. The Portland doomers are currently in France for Hellfest.

Hawkwind, Nik's previous employer, postponed their proposed North American tour for the second time in February of this year over logistical/monetary issues. There's been no word yet if they'll make a third attempt to play the US. In the meantime, Nik Turner is your man if you're in search of space.

All of the dates are listed, along with a 2013 Space Ritual live set and Witch Mountain and Hedersleben streams, below.