"i am so desperate to get into the bowery show. ive tried every avenue imaginable with zero luck. even bowery staff cant get in unless theyre lucky enough to be working that night. its just sheer craziness down there." - Craigslist person 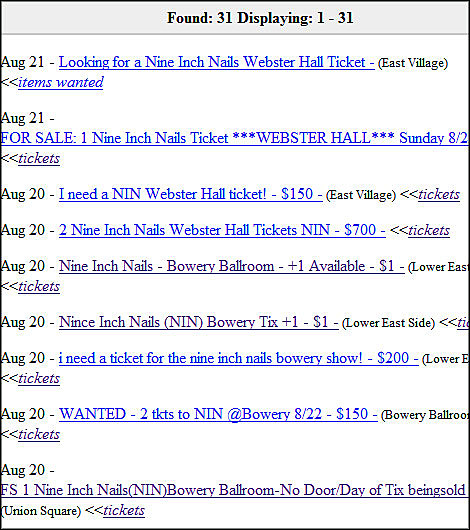 Nine Inch Nails frontman Trent Reznor recently said something along those lines when he was asked why he'd announced his band's current tour would be their last.

Of course, when you say you don't want to be an aging rocker, you inevitably have to compare yourself to someone...

"I'd never want to be Gene Simmons, an old man who puts on makeup to entertain kids, like a clown going to work," Reznor told the Philippines' Daily Inquirer last month. "In my paranoia, I fear that if I don't stop this, it could become that."

Simmons fired back in the Letters From Fans section on KISS' website.

"Trent grew up on KISS and cut his teeth on our toons," he wrote. "When he was recording Downward Spiral, he had two action figures on his mix console -- Jesus and Gene Simmons.

"Once you're a self confessed heroin addict, who used the stuff for years, you don't look at life the way the rest of us do... I'm told.

"We all wish him well." [Chart Attack]

Nine Inch Nails kick off their 10-date, pre-hiatus tour this Saturday night (8/22) at Bowery Ballroom in NYC (with The Horrors). Sunday is Webster Hall (with Horrors), and then Tuesday (Horrors) and Wednesday (Mew) are the shows at Terminal 5. Did you get tickets?