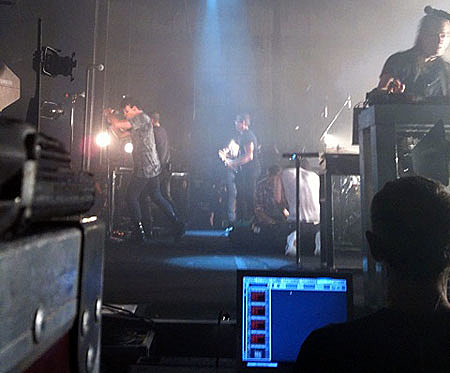 Sorry about the hassles with the show not happening last night and tomorrow's rescheduling. If it would have been possible to pull these off, I would have. Anyway, here's the new plan. I appreciate your patience and understanding - we're attempting to make sure that everyone has the best experience possible and we're at full power.

The first of four 'Wave Goodbye' NIN shows in LA was at the Palladium on September 2nd. Gary Numan joined the band as a special guest at that show, and at the Echoplex show on 9/6, and again last night (9/8) at the Music Box @ Fonda.

Unlike the first two shows though, Gary was not alone at the third. The Henry Fonda audience didn't get Peter Murphy, but they did get Mike Garson (David Bowie, etc), Eric Avery (Jane's Addiction), Danny Lohner (NIN & lots of stuff), AND Greg Puciato (Dillinger Escape Plan). All five of them came out to play songs with Trent Reznor and band.

Gary Numan and Eric Avery were on stage together for a cover of Gang of Four's "Anthrax" (and for "Cars"). Plus, HEALTH opened the show and later joined Nine Inch Nails and friends on stage too (see picture above). There were two encores and two Joy Division covers. No full albums played, but there were 31 songs total. Full NIN setlist below...