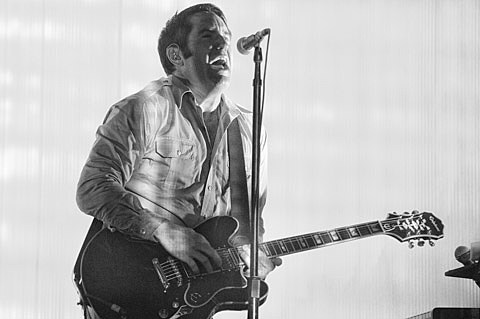 Trent Reznor has been keeping pretty busy this year with his How to destroy angels_ project and his contributions to the new Queens of the Stone Age album, but he's also been promising a new Nine Inch Nails album. That album has now officially been announced. It will be called Hesitation Marks and is due out on September 3 via Columbia. They've also just revealed the first single, "Came Back Haunted," which you can listen to in all its thick, synthy darkness below.

Nine Inch Nails have also been promising a tour and that's been announced now too. The tour hits the NYC-area on October 14 at Barclays Center and October 15 at Prudential Center. And the band's taking along some pretty amazing support. Both NYC-area dates and many others will be supported by Godspeed You! Black Emperor, and other shows on the tour are being opened by Explosions in the Sky. Tickets for those shows are not on sale yet, but check Ticketmaster for updates.

As discussed, NIN's lineup for this tour will be Trent Reznor, Alessandro Cortini, Josh Eustis, Ilan Rubin, and Robin Finck (who replaced Eric Avery). Adrian Belew played on Hesitation Marks, but won't be joining the band on the tour. All dates are listed, along with the new song stream, below...