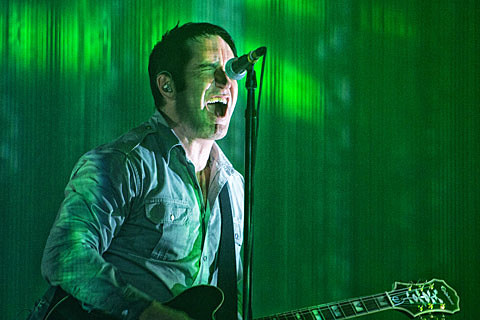 As discussed, Nine Inch Nails are back this year with a new album, Hesitation Marks, due out on September 3 via Columbia and a tour to follow. That tour includes a run with Godspeed You! Black Emperor that hits the NYC-area on October 14 at Barclays Center and October 15 at Prudential Center. Other shows on the tour are being opened by Explosions in the Sky, but none near NYC.

Since we last spoke, ticket info has been posted for both NYC-area shows. Tickets for both dates go on sale June 14 at 10 AM and there's a Live Nation preasle for the Prudential Center show starting June 13 at 10 AM.

As mentioned, Adrian Belew (Talking Heads/David Bowie collaborator and King Crimson member), who was initially on board to tour with NIN this year, has parted ways with the band. He took to facebook to comment on the issue: "concerning me being part of the 2013 Nine Inch Nails band: it didn't work."

All dates are listed, along with a stream of the new NIN single, below...