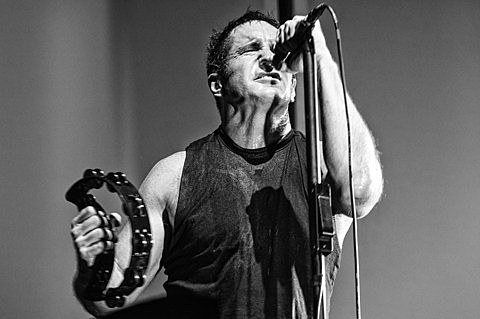 Nine Inch Nails released a Spotify-only live EP today, just a week to the day after their new full-length Hesitation Marks. Three of the four songs on the EP were recorded at Lollapalooza, the other at 2013 Fuji Rock Festival. Nine Inch Nails' stage show on their current tour has been drawing strong reviews and features a big, potentially seizure-inducing light show (watch how the crew sets it up), so it might not be a bad idea to catch them on their upcoming massive tour that includes dates with Godspeed You! Black Emperor and Explosions in the Sky and hits Barclays Center on October 14 and Prudential Center on October 15. Tickets for both are still available. All upcoming dates are listed below.

Listen to the new EP, which features "Copy of A," (recorded at Fuji Rock Festival) "Came Back Haunted," (watch the video) "Sanctified," and "Find My Way," on Spotify.