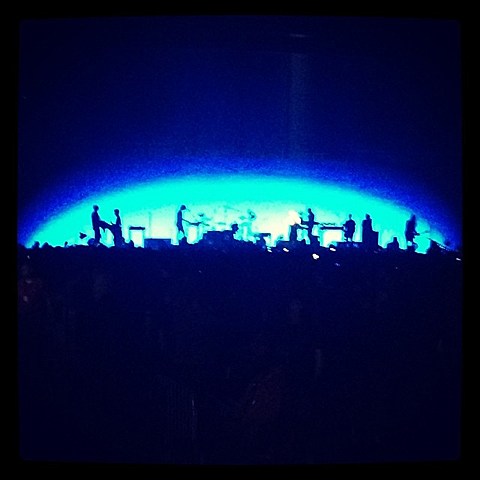 Last night (10/14)'s Nine Inch Nails/Godspeed You! Black Emperor show was the first time I've ever been to the Barclays Center. For a show-goer who's mostly used to bars and shitty clubs, walking into the Center is a bizarre experience. The combination of its size, its quasi-organic design, and its many flashing lights & screens make you feel like you're boarding a spaceship. Fitting, I suppose, for the lineup in question.

As weird as the Barclays Center itself is, seeing Godspeed You! Black Emperor there was even weirder. It's not always immediately apparent from listening to their music, but GY!BE are a deeply political band whose main sources of inspiration are social injustices and the eventual collapse of industrialized civilization. (You may remember their harsh response to winning a Polaris Prize a few weeks back.) Watching any band play a huge arena is surreal, but watching these guys bang out their epic jams in one, despite their loud antagonism towards the establishment, was even odder.

Barclays was still about half empty when GY!BE played, which wasn't really their fault -- the venue publicized an 8pm start time for the show, but had the band begin their set at 7:30. Dick move, especially given how great they sounded. GY!BE always sound big, but in the giant reverb echo chamber that is the Barclays interior, they were truly massive.

NIN's set had no such timing miscues. In fact, aside from a few tiny live sound glitches, it really had no miscues whatsoever. Trent Reznor and the backup musicians he recruits have always leaned towards the slick and polished side of things, but seeing them crank through a full two-hour set in full arena rock mode, complete with an extensive light show, virtually without stopping was quite the big-money spectacle. The set leaned fairly heavily towards NIN's new effort Hesitation Marks, but Reznor threw enough golden-era material (including epic set- and encore-ending renditions of "Head Like a Hole" and "Hurt") to please the mostly late-20s/early-30s crowd.

Reznor's only talking break to speak of came during the encore, when he took a moment to express his gratitude (and disbelief) that his project has continued to do so well for so long. The point was well-taken. Most people never fill a single arena; Reznor's been doing so on and off for 20 years. Talk about living the dream.

The NIN/GY!BE tour continues in NJ tonight (10/15) at Prudential Center (tickets). Some videos from the Barclays Center show, the setlist, and the list of remaining dates below...

Nine Inch Nails at Barclays Center - 10/14/13 Setlist: (via)
Copy of A
1,000,000
Terrible Lie
March of the Pigs
Piggy
All Time Low
Disappointed
Came Back Haunted
Find My Way
The Frail
The Wretched
Satellite
In Two
Survivalism
Running
A Warm Place
Somewhat Damaged
Wish
Burn
The Hand That Feeds
Head Like a Hole

Encore:
The Day the World Went Away
Even Deeper
While I'm Still Here
Black Noise
Hurt