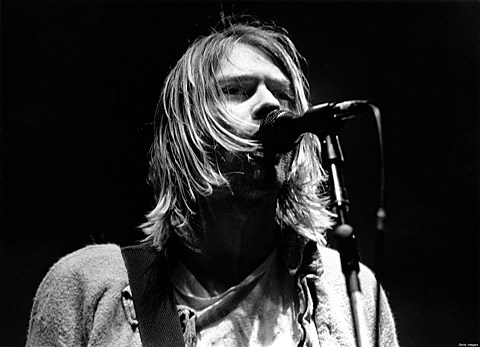 It's almost exactly 20 years since the death of Kurt Cobain, and that of course means tons of things about Kurt and Nirvana have been popping up in the news (some, like Rock and Roll Hall of Fame, have nothing to do with his death though). First, KIRO 7 reported that Seattle police unearthed four developed rolls of film that had been sitting in a police evidence vault for years, and would be reexamining the case of his death. KIRO 7 also say they will be showing one of those images tonight at 11, and will explain why the police wanted to reexamine it. From their report:

The medical examiner determined Cobain had killed himself three days earlier - only days after he had left a rehab facility.

Before he was shot, police said Cobain had a lethal dose of heroin. The syringes Cobain used and the heroin kit was kept in the Seattle police evidence unit and was part of the re-investigation along with the previously undeveloped film.

On KIRO 7 Eyewitness News Eleven at 11, we ask the lead detective about the evidence and why it was kept for years, even though the initial investigation determined it was a suicide.

HOWEVER, The Seattle Times reports that despite KIRO 7's claims, the case has not been reopened:

A recent re-examination of the investigation into the suicide of rock legend Kurt Cobain nearly 20 years ago uncovered undeveloped photos of the death scene but nothing that changed the findings, Seattle police say.In anticipation of the April 5 anniversary, a Seattle police cold-case detective recently took another look at the case file, according to police spokeswoman Renee Witt. However, she said there were no new findings and the case is not being re-opened, contrary to some media reports.

The detective "dug up the files and had another look, and there was nothing new," said Witt.

The detective found rolls of undeveloped film, were developed and showed the scene of Cobain's suicide, said Witt. She called the new photos "underwhelming."

Fox News also posted two tweets from the Seattle Police Department which seem to confirm the case has not ben reopened:

"Despite an erroneous news report, we have not 'reopened' the investigation into the suicide of Kurt Cobain," the Seattle Police Department tweeted from a verified account.

The police went on to explain on Twitter that the case was simply being reviewed in anticipation of the 20th anniversary of Cobain's untimely death.

In less confusing news, a GoFundMe campaign was set up by Jaime Dunkle to turn Kurt's childhood home into a museum. Broward-Palm Beach New Times reports:

To get the approval for the possibility of the museum, Dunkle had to send a bio about herself to Cobain's mother, Wendy O'Connor, and prove that she wasn't a "crazed fan" and could actually pull this off. She highlighted numerous scholarships she's received and other achievements. "I used to be in the American Criminal Justice Association, so I made a long list of everything I've ever done and emailed it to the real estate agent, and she said she was forwarding it to Mrs. O'Connor. After that, they started taking me more seriously, I think. It took weeks of phone calls and emails, but I successfully set up an appointment to see the house. I deliberately arranged it to be on what would have been Kurt Cobain's 47th birthday."

"Being inside was a total head spin. I had to meet with city officials and the realtor first, and by the time we finished hashing out some logistics for making it a museum, I only had 15 minutes to take pictures and make a video. As I wandered around, looking in closets, I imagined him as a teen, crouched inside, scribbling in his diaries or making sketches. The walk up the stairs into his bedroom made the hairs on my neck stand up. All I could think was that I was seeing through his eyes and walking in his footsteps, literally."

To donate, head to GoFundMe.

In more news, as you probably know, Nirvana are getting inducted into the Rock and Roll Hall of Fame on April 10 at Barclays Center, but Radio.com recently confirmed that drummer Chad Channing (who played on Bleach, and 1988's Love Buzz 7", the release that made them eligible to be nominated) will not be inducted. The Rock Hall contacted Nirvana's manager via a text, saying "Can you tell whoever looks after Chad Channing that he isn't being inducted... It is just Dave, Krist and Kurt."

Before learning that he wasn't being inducted, Chad told Radio.com, "When I told my daughter about the induction, she was super excited for me! So much of my excitement about it is for her! She's pretty awesome! My little boy is too young to understand though. So yeah, it does feel pretty good!"

Nirvana is also releasing the "Pennyroyal Tea" single b/w "I Hate Myself and Want To Die" on 7" vinyl for Record Store Day 2014. "Original plans for the single in 1994 were cancelled due to Kurt Cobain's death."

And lastly, London's Sivu has recorded a chilled-out cover of "Dumb" which you can exclusively listen to below...