Nite Jewel at LPR in August (more by Toby Tenenbaum) 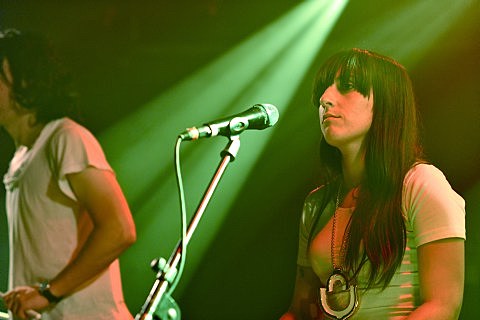 Nite Jewel (aka Ramona Gonazalez) is a bit of a musical shapeshifter, having previously recorded lo-fi experimental pieces, performed with Linda Perhacs (along with Julia Holter), and performed a Kraftwerk album in its entirety, among other things. Just recently, she recorded a piano cover of Stevie Wonder's "Visions," which you can watch a video of below.

But on this year's One Second of Love, Ramona went for more of an overtly pop approach than her earlier work, and that interest comes across pretty strongly in her top ten songs of 2012 list, which you can check out below. Half of the list is made up of this year's big rap/R&B faves, and it also includes collaborator Julia Holter, Zebra Katz (whose video we just posted), and more.

Check out her full list and the "Visions" video below...