"No, Mr. Bond, I expect you to enjoy gourmet popcorn and white summer ale..." 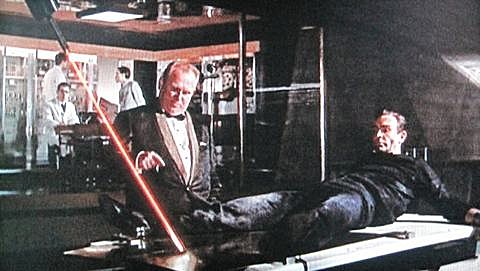 While Summerscreen ended a couple weeks ago, folks in Williamsburg who enjoy movies under the stars have a new option. Nitehawk Cinema is presenting a free (with RSVP) series called Nitehawk Outdoors at the new Havemeyer Park located at Wythe Avenue and South 3rd St. The series mixes music and film and kicked off last week with Dolly Parton's The Best Little Whorehouse in Texas and a performance from a Dolly Parton tribute band.

There are two more events to come: September 10 is Chicago featuring a performance by Michael Arenella and His Dreamland Orchestra (RSVP). And then on September 17 they'll show James Bond classic Goldfinger, with soundtrack band Morricone Youth playing before (RSVP). In addition to the movies and music, Brooklyn Star, Oddfellows Ice Cream, and Brooklyn Brewery beer. Music starts at 7:30 PM with the movie to follow at 8:30 PM.

Havemeyer Park is an "interim community space" that also is currently home to a BMX bike course and an "urban farm."