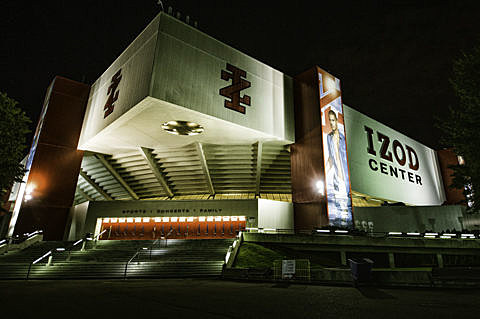 NJ officials want to close down the Izod Center because no sports happen there, it's losing money, and it can't seem to compete with all the other arenas and stadiums in the area (like Prudential Center in Newark and Barclays Center in Brooklyn). The Jersey Record reported this morning that shut down would likely be approved at a meeting today, but NJ Advance Media reports:

Local officials, union members, and members of the state Legislature assailed proposals today to shut down the Izod Center arena in East Rutherford, calling the plan rash and short-sighted.

The criticism during a meeting of the New Jersey Sports & Exposition Authority came as the board was considering a vote on closing the 34-year-old arena for at least two years, and shifting the events on its schedule to the Prudential Center in Newark.

While the state has been talking publicly for more than a year about getting out of the sports and entertainment business, the proposal to simply turn off the lights at the Izod Center came suddenly and without warning yesterday.

So, the Izod Center lives on, for now, but its future doesn't look bright (UPDATE: NEVERMIND. They voted to close it!). Read more at NJ.com

There are currently 16 upcoming ticketed events at the Izod Center including wrestling, the circus, Disney live, Chris Brown and Maroon 5.

MetLife Stadium is right next door, also part of the Meadowlands complex, and is in no danger of closing. It has Taylor Swift and the Electric Daisy Carnival coming up, and is the home stadium for both the Giants and the Jets.

Naturally, Bruce Springsteen, who played the final show at Giants Stadium (which was replaced by Metlife Stadium), played the very first concerts at Brendan Byrne (now the Izod Center). Watch the now-amazing video news reports from 1981, below...