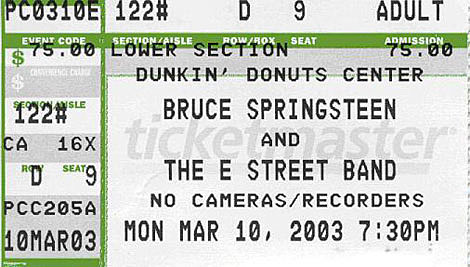 "Ticketmaster faces a Judiciary Committee hearing on Tuesday about its plan to merge with Live Nation, but at least the company managed to resolve its conflict with the state of New Jersey just before the hearing takes place.

Bruce Springsteen's home state settled with the ticketing giant after fans filed thousands of complaints that Ticketmaster gouged them and others by directing them to its secondary ticketing market, TicketsNow, which offered tickets marked-up hundreds or even thousands of dollars above their asking price on the first day in which they were available.

As penance, the company paid New Jersey $350,000 and promised to compensate approximately 2,200 people who were overcharged as part of the flap, according to the Wall Street Journal (whose article can't be read without a subscription). Their means of compensation is a bit odd; out of those 2,200 disgruntled Springsteen fans, 1,000 will be entered in a random drawing to receive permission to purchase two tickets to another show on the tour without having to pay Ticketmaster's notoriously onerous convenience fees (so that's how you avoid those fees: by winning a lottery?).

In addition, Ticketmaster must erect a better wall between its primary and secondary ticketing businesses and must prove that it is selling its tickets first to the primary market, as opposed to injecting them directly into TicketsNow, whose auction style bidding generally results in higher prices.

Barry Diller, CEO of Ticketmaster, originally pinned blame for the foul-up on Visa. The company later clarified the problem was with its credit card billing system in general, which was overloaded by consumer interest in these shows -- never underestimate the popularity of Bruce Springsteen in the tri-state area.

Top brass from Ticketmaster and Live Nation will appear in a Justice Department hearing on Tuesday to determine whether they should be allowed to merge, called "The Ticketmaster/Live Nation Merger: What Does it Mean for Consumers and the Future of the Concert Business?" [WIRED]

Wired further points out that the hearing will be webcast starting at 2:30pm EST.