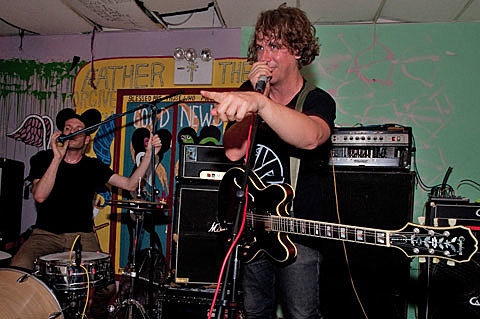 No Age played two shows in NYC on Sunday. First was at Brooklyn Bowl (instead of Williamsburg Waterfront) (pics here and here), and then late night they headlined a Death By Audio show that Universal Order of Armageddon also played.

Next up, the LA indie noise punk rock band will play a string of dates this September leading up to the release of their new album on Sub Pop (btw did you notice their Sub Pop labelmate in the pit at Death By Audio last night?). Those dates include a September 18th show at Music Hall of Williamsburg in Brooklyn. It goes on sale Friday at noon.

Other dates on No Age's tour are with Pavement, but they will not be opening one of the NYC shows (even though they will be here around the same time). All No Age dates, and a just-released (((unartig))) video of No Age playing Shangrila in 2007 (featuring some on-the-speaker guitar playing) below...