No Age at Station to Station (more by Lukas Hodge) 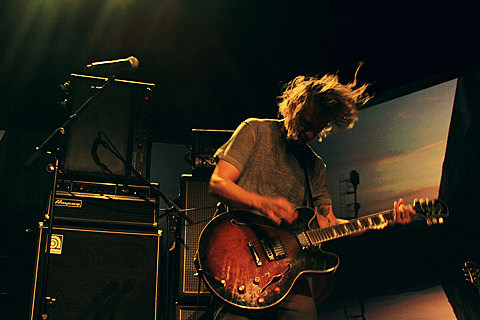 Artists John Herschend and Will Rogan's The Thing Quarterly, "a periodical in the form of an object," released their newest "issue" yesterday (9/25) which No Age contributed to. Here's details:

Issue 24 is by Kate and Laura Mulleavy of Rodarte, with contributions from experimental punk group No Age and director/photographer Todd Cole. It thematically revolves around the idea of deconstruction, a common theme in Rodarte's design work. The record's sound and imagery are repurposed from 'Aanteni' (2010), a short art and fashion film produced by Rodarte, which also features direction by Todd Cole and an original soundtrack by No Age. The film explores similar themes of balance and chaos.

The 12" picture disc on clear vinyl features two tracks by No Age. Side A provides the ambient 9-minute soundtrack from 'Aanteni' with an abstracted film still by Todd Cole. Side B features a 13-minute live version of the track, "ruined" by looping the sound repeatedly on itself, with burnt remnants of Cole's same film still. A conceptualized inner sleeve and gatefold jacket house the issue, displaying more of Cole's imagery. The issue also includes a free download of both No Age tracks and comes shrink-wrapped in a signature THING Quarterly custom box.

You can pick yours up here.

In related news, No Age/Pissed Jeans-related band Rat Fist, who played their first shows and released their debut 7" back in June, will be returning to NYC to join Toronto's Teenanger at one of their two shows here. They'll play with them when they hit the soon-to-close Death by Audio on October 16 with The Abandos and Foster Care. That show is $8 at the door.

Teenanger's other NYC show happens October 17 at Cake Shop with Nancy and Abandos, and since we last spoke Rock Bottom Boy and Philly's Sheer Mag have been added. Sheer Mag recently released their debut 4-song 7" through their own Wilsuns RC label. With its classic rock riffs and scrappy garage rock, it's the kind of thing that should appeal to fans of Tony Molina, Natural Child and the like. You can stream it in full below. The Cake Shop show's the first date of Sheer Mag's tour with Nancy (most venues still TBA), and after that they'll open the Philly stop of the Screaming Females / Pujol tour. All of their dates are listed below.