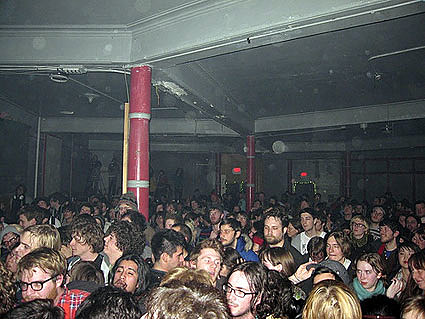 Sometimes you leave a show and feel like you've witnessed something special. Such was the case for me at the No Age show at Market Hotel in Brooklyn last night. The place was packed, and unlike the show they opened for Liars @ Warsaw, this crowd was absolutely insane. From the very first note to the last, people did not stop dancing, swaying and slamming into each other. The music was fast and loud - the way punk rock is supposed to be played. Every song was performed with intensity and heart.

The space itself was also great - one of the most fun venues I've been to, though cold. After entering through a barely-noticeable door on a side street, you walk up a STEEP set of stairs. The triangular shaped performance area gave it an amphitheater like feel with the stage at the narrowest part and a wooden bleacher structure in the back. Lit only by a few candles and dim lights, the Market Hotel did a great job at setting the mood. The bar is in a separate room in the back, and that was tight and filled up quickly. The major complaint was the lack of heat, but everyone (myself included) seemed to forget about that problem once No Age took the stage.