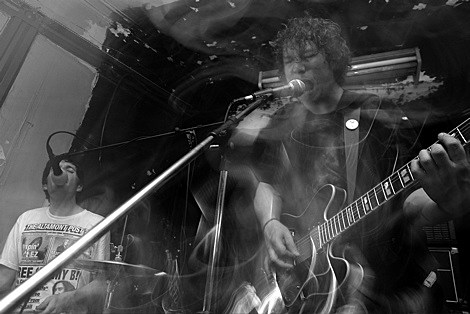 Bob Mould has a few more shows coming up including one at Carnegie Hall and two at Joe's Pub.

Currently in Mexico, No Age have a few dates scheduled around their appearance at the Sub Pop SXSW showcase in Austin on March 19th (all dates below). On March 20th, they'll be judging a battle of the bands in the same Texas town, and so will we (BrooklynVegan) - well Black Bubblegum to be exact, and so will GZA...

"Eight of the best unsigned, independent bands around will compete in the inaugural Dickies Battle of the Bands on Friday, March 20, 2009 at The Compound in Austin, TX from 1-6 p.m. Grand-Prize winner receives the roar of the crowd as they dominate the stage AND a fat check for $10,000. Runners-up will be rewarded handsomely with Dickies gear.

The bands competing are 6 Days Bender, Facts on File, Golden Triangle, Holy Hail, Roll the Tanks, The Ferocious Few, The Snake Trap and The Story Of.

This is one of many BV-related SXSW events. Info on the BV official showcase HERE. Others TBA. All No Age dates and that video below...

Bob Mould and No Age perform 'Miner' and Husker Du's 'New Day Rising' at Bottom of the Hill on Sunday, March 1, 2009. The show was part of the 17th Annual Noise Pop Festival. Wow.