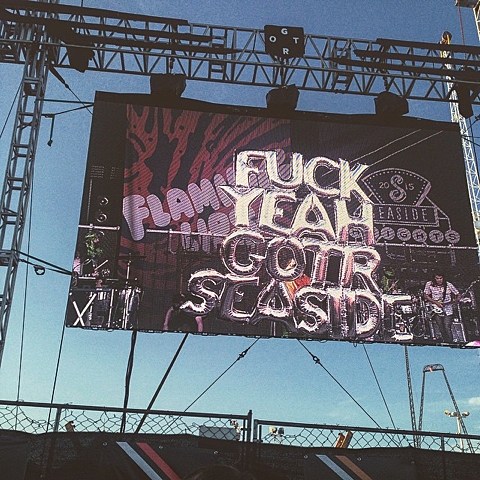 There is nothing to say about The Flaming Lips' musical performance, because there is too much to say about the space-psychedelic madness and spectacle that was their stage show. Singer and party maestro Wayne Coyne employed confetti guns, confetti cannons, a tapestry of pull-apart silver balloons, a gong and much more to entertain the crowd. Roadies in oversized butterfly king and sun costumes took the stage for "Yoshima Battles the Pink Robots," and human-sized mushrooms and rainbow joined the wild-haired Coyne for the closer "Do You Realize."

Jenny Lewis, whose warm, California pop and blues-rock style has been embraced by alternative crowds for a 15 years, was endearing as the festival's anthemic frontwoman. Donning an ivory pant suit with a celestial scene stenciled onto it, she crooned the "ow, ows" of soulful tune "The Moneymaker" and dazzled with rich vibrato on the acoustic "With Arms Outstretched." For how intimate Lewis's songwriting tends to lean, her work played well to the huge audience, and her presence was steeped in complete comfort. [NJ.com]

The same weekend as Governors Ball and Summer Jam, an estimated 30,000 people were being mellow on the beach in Seaside Heights, NJ. It was the NJ stop of Mumford & Sons' traveling Gentlemen of the Road festival, which included sets from The Flaming Lips, Alabama Shakes, Jenny Lewis, The Maccabees, Dawes, The Very Best, JEFF the Brotherhood, The Vaccines and more. Fans camped out on the beach, and even the little bit of rain on Friday night didn't ruin that, as App.com points out:

Rain fell overnight and in the morning Saturday on the city of tents that sprang up on the Seaside Heights beach for the Gentlemen of the Road festival.

Rainwater collected on the floor of the tent of high school seniors Victoria Ciccozzi and Nicole Bindell, both 17 and from Toms River. They stopped the flooding with toilet paper.

Fresh from a night of hearing Alabama Shakes, they didn't mind.

"It wasn't like the next Hurricane Sandy or anything," Nicole said. "It was just a little leak."

The article also points out that Seaside Heights Police Chief Tommy Boyd said there were "zero problems" and that the festival "brought in good people. It's amazing. They were super nice people." Check out the video recap at App.com.

Mumford & Sons and Maccabees also played two Coney Island shows a few days earlier, and The Flaming Lips played a free Montauk show on Sunday after the Mumford fest (pics coming soon). The Maccabees play NYC on their own this Tuesday (6/9), and both JEFF the Brotherhood and Alabama Shakes have NYC shows coming up too.

Cause I have other things to fill my time. You take what is yours and I'll take mine; Now let me at the truth which will refresh my broken mind. #GentlemanOfTheRoad #GOTR #Gopro #BeAHero #Hero4

When Jenny Lewis wanted a slice pizza during her performance at Gentlemen On The Road yesterday, she got it!