Buffalo Springfield at Bonnaroo (via WNCX) 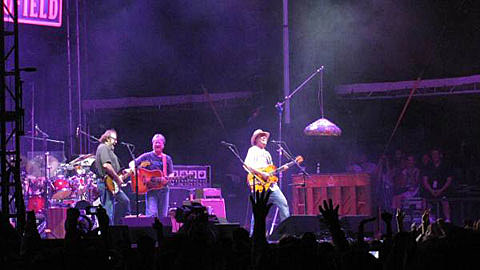 Crosby, Stills and Nash's previously mentioned show at Beacon Theatre is sold out. They've since added a second date the next night (8/31) at the same venue which still has tickets available. They also have a show coming up in Mountain View, CA with Jackson Browne, Bonnie Raitt, Jason Mraz, The Doobie Brothers, Tom Morello and others to support disaster relief efforts.

Buffalo Springfield (Furay, Stills and Young) went on their first (short) tour since 1968 leading up to a headlining slot at Bonnaroo this year. They told Rolling Stone they'd do a 30-date tour in the fall which would hit LA, NYC, and other cities. The tour, which was still never officially announced, is now postponed until 2012. According to a post on guitarist Richie Furay's facebook:

"For those of you getting excited about the Buffalo Springfield fall tour - word has just come to me that it has been moved to the first of next year," he wrote. "I'm not going to spend a lot time here with details as you speculate among yourselves - there's nothing to speculate about, the tour has simply been moved."

Meanwhile, Neil Young wants to work with Justin Vernon. Though the serial-collaborator may be on the verge of slowing down:

"I think the easiest way to explain it is that before, when I had other jobs or whatever, all I ever wanted to do was play music all of the time. So now whenever anything comes along - a Peter Gabriel cover, or recording Hadestown with Anaïs, it's like yes! Of course! And then you get tired, and you think, 'Well, I'd better say no to everything from now on.' But then the Kanye thing happens. Or ... Neil Young called two days ago, and I'm almost like: 'Oh fuck,' because whatever he's going to say I'm going to want to deal with, you know?"

Maybe Neil will give Justin a break and collaborate with Taylor Swift, who he is reportedly a fan of, instead.

Updated CSN dates (all three of them) below...