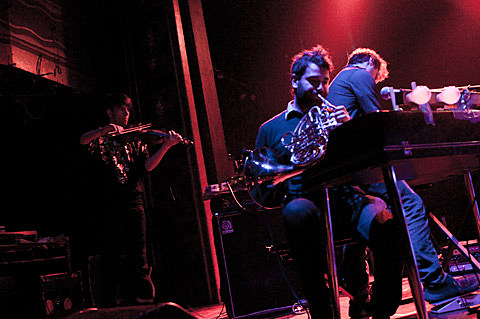 It's Memorial Day Weekend which used to mean, if you stayed in town, there was nothing to do except go see whatever piece of crap Hollywood was foisting upon us, hang out at backyard BBQs (not a bad thing at all), and enjoy a relatively emptied-out city. Not so much anymore. I mean, there's still Hollywood crap -- take your pick of sand-n-sandals epics SATC2 or Prince of Persia if you must -- but people stick around more, and there's clearly more options for the music fan. Lots of good stuff this weekend, most of which you can still get tickets.

Also: lots of Montreal action this weekend. Starting tonight (5/27) with an early show at Mercury Lounge with The Luyas and Braids. If you check in with BV fairly often you already know we're pretty big fans of the former. It took them a while to finally come play NYC but now that they have, they seem to be coming back weekly. It's not the most straightforward music, but there's a magical quality about The Luyas that worms its way under your skin.

Braids are doing a similar thing but with a different sonic palette, more electronic, more trancey. As I wrote before, I was impressed when I saw them on Tuesday at Knitting Factory. I wish they spent as much time on the songs as the soundscape-ish arrangements, but there's a lot of promise in their best songs (like "Lemonade" which you can download above) and they're definitely worth checking out. Like I said, it's an early show -- Luyas open at 7:30 -- which leaves most of your evening open. If you can't make it tonight, Braids also play Rooftop Films tomorrow, where they're paired with a collection of "Dark Toons," which sounds like a good match to me. 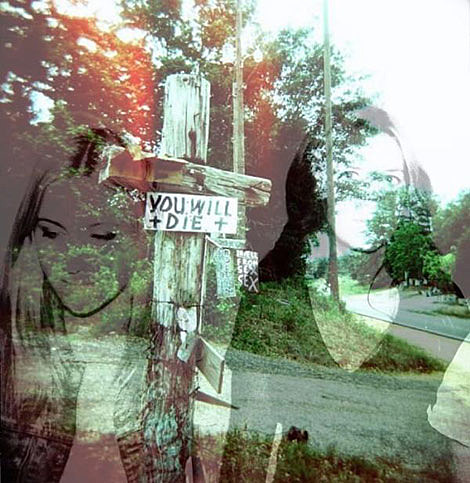 If you wanted to keep the MTL thing going after the early Luyas/Braids, you could then head over to Cameo Gallery to see No Joy who split their time between that city and Los Angeles. I don't know a whole lot about these two girls but I really dig the two songs that have been floating around which were produced by Think About Life/Miracle Fortress whiz kid Graham Van Pelt. I've seen some people call their sound shoegaze, but it's more in that Dinosaur Jr. kind of way than a Ride/Slowdive kind of way. Thick, sludgy and rockin'. Look out for an EP on Mexican Summer sometime soon. They played last night at Shea Stadium and apparently blew everyone's eardrums out. You are warned.

Also on this eclectic bill: the paranoid postpunk/electropop of Psychobuildings (check out "Birds of Prey" at the top of this post) who kind of remind me of The Pop Group; The Surprisers (another band featuring German Measles/Cause Co-motion/etc etc dudes); and the gentle orch-pop of North Highlands who I've written about before a few times.

And am writing about again right here. Shameless plug time. As you may have seen, I'm working with the Seaport Music folks to put on a series of lunchtime shows every Wednesday in June down at Pier 17 (the Seaport Stage). The shows are in conjunction with the Fulton Stall Markets, a farmers market in the old Fulton Fish Market stalls across the street from the Seaport. The market opens on Sunday and we're doing a kickoff show with North Highlands. I DJ at noon and then the band is on at 1PM. I'm super happy to have North Highlands play the first show, they were the first band I thought of for this, and think they're easily one of the most promising new bands in NYC. Anyway, come down if you can. The rest of the Sound Bites Lunchtime Series schedule (including The Beets, Ribbons and more) can be found here. 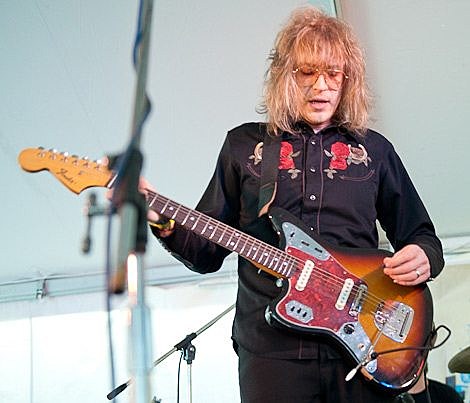 Okay, back to Montreal. Friday night (5/28) The Besnard Lakes are playing Bowery Ballroom with Land of Talk. People overuse the word "epic" but the Besnard Lakes make music that deserves that description. And epic doesn't necessarily mean "overblown." Take, for example, "Like the Ocean, Like the Innocent" which opens their new album Are the Roaring Night. It's an amazing slow build that explodes (in slo-mo, yet not in a Michael Bay way) in the chorus with a giant wave of guitars. One of my favorite songs of the year, and it crushed at the Brooklyn Vegan day party during this year's SXSW. I've never seen a bad Besnard Lakes show. I highly, highly recommend you go.

Openers Land of Talk are no slouches in the live department either. The band's second album, Cloak and Cipher, is due out August 24 on Saddle Creek, and we should get a nice preview of it tomorrow night.

A few more weekend picks, day by day (and tour dates below): 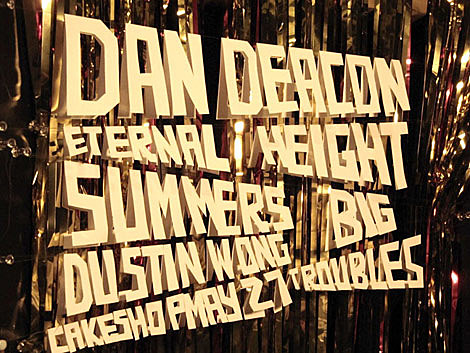 Cake Shop continues to celebrate its fifth anniversary with an insane show tonight headlined by Dan Deacon. I will admit I've never been a huge DD fan but the rest of the line-up is up my alley. Roanoke, VA duo Eternal Summers are coming up just for this show, and they were terrific at Glasslands last month. Also playing: Big Troubles (another favorite), Baltimore "digital rap" group Height, and Ponytail's Justin Wong. Tickets are $10 and it's sure to be insanely crowded. Also a word of warning: Unless they've fixed the A/C in the last week, it was also be a sauna down there.

There's another one of these Scion Garage shows at Knitting Factory tonight, free with RSVP. Cheap Time from Tennessee headline with Denton, TX's Bad Sports (who kind of sound like The Rezillos or The Undertones to my ears) opening. 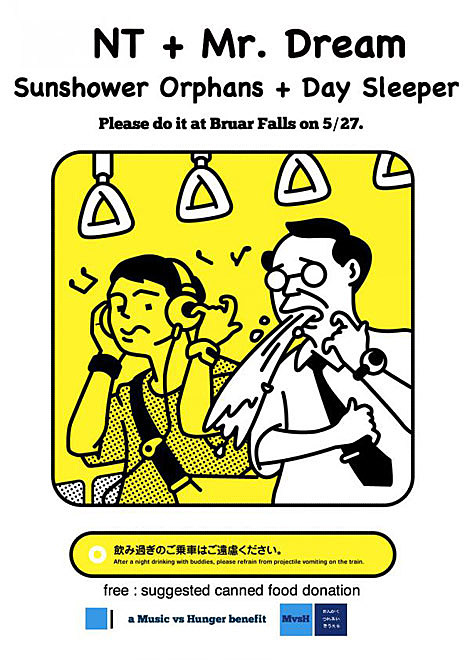 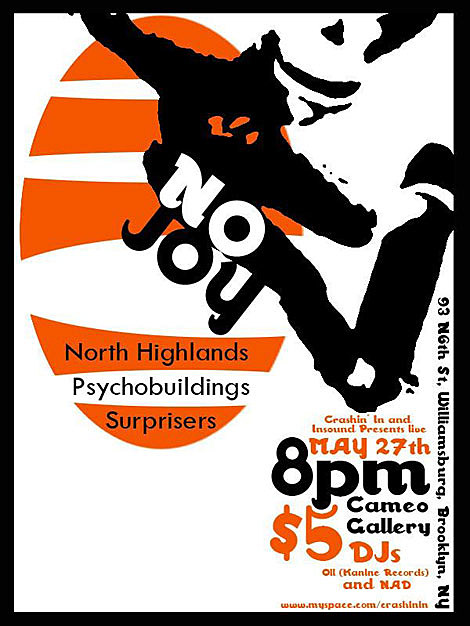 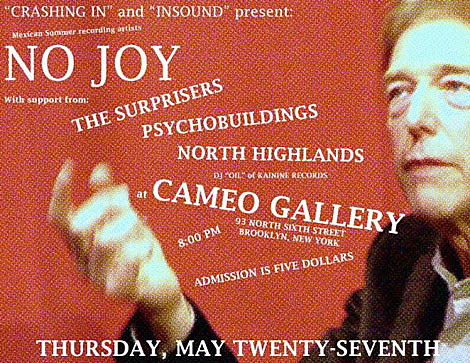 Twin Sister's Color Your Life is finally out in physical form the band play a record release party at Glasslands to celebrate. Also appearing: Data Dog, Lost Boy, and Sterogum's Amrit Singh (Winner, Best Blogger Hair 2007 - 2010) on the ones and twos. Twin Sister head out on tour with Bear in Heaven in July, and those tour dates are at the bottom of this post.

Down at 92Y Tribeca you can catch indie legend Grant Hart and underrated local band The Octagon. 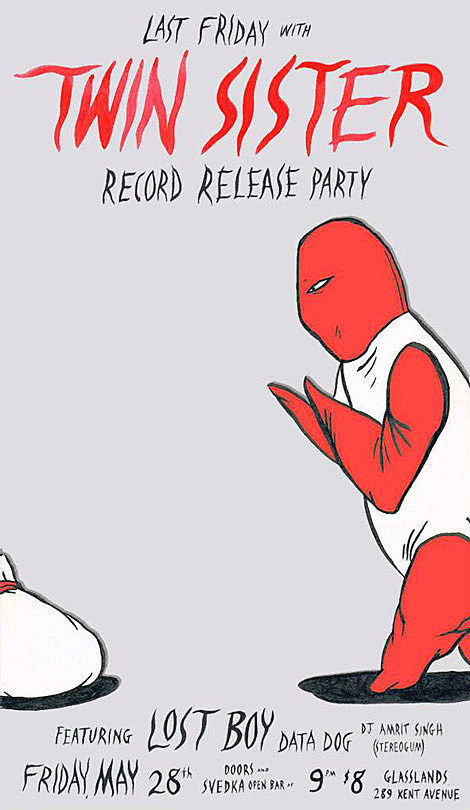 Love riff-heavy party rock? You got two good choices on Saturday (when it's all right for fighting). If you prefer it '80s amphitheater style, check out Free Energy play Bowery Ballroom.

If you like it a little more '70s all-night-bender style, Cheeseburger Nick Diamonds and Hard Nips are at The Bell House. The latter is a free show from the Vice Folks with a prom theme where you're encouraged to wear your tux and Chucks. Reportedly Nick will be driving up in a Delorean which means the event may be Back to the Future themed. RSVP here. 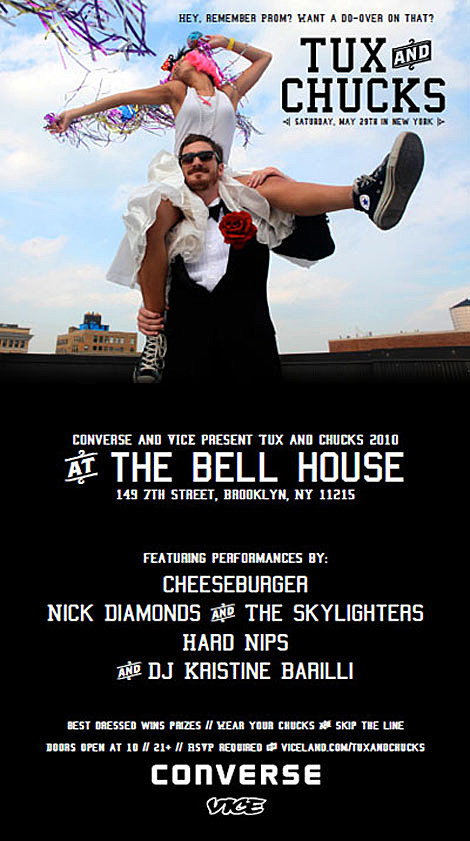 That's it for this week. Have a safe long weekend. Videos and tour dates below...

--
The Besnard Lakes - And This is What We Call Progress

Bad Sports - All the Time