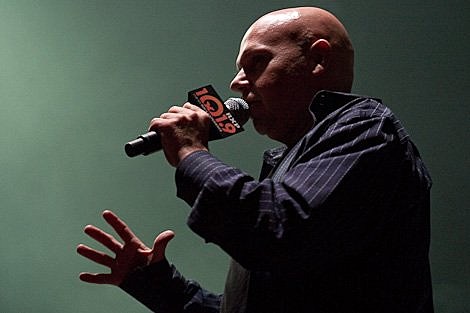 Last month it was announced that "RXP TakLiberty Festival" would take place on September 18 at NJ's PNC Banks Arts Center with Coldplay, The Pains of Being Pure at Heart, Two Door Cinema Club, The Kooks, and more. According to RXP's website, the show is now cancelled "due to unforseen circumstances". Refunds are available at the point of purchase.

"It was so strange that the concert was announced a day before the news that WRXP was being sold. Then it was promoted for over a week. I'm surprised Emmis let this happen. This must represent a lot of work down the drain for some of WRXP's staff. I feel bad for them."

Back on June 21st the Daily News reported:

WRXP has been a rock station since Feb. 5, 2008, when Emmis terminated its former smooth jazz format. The station has struggled to find an audience in a town not known for rock radio, but in recent months had shown significant ratings gains.

Merlin Media, which is paying $110-$130 million for a controlling interest in WRXP and two Chicago stations, made no announcement today on the format at WRXP.

Leslie Fram, program director, said that for now the station will continue rocking.

The Village Voice then said that, "It's not too much of a stretch to assume....that the station will change formats before the RXP Takliberty Festival's scheduled date of September 18, hence the cancellation."

Well, they were right. The Daily News has reported today:

Don't tell Leslie Fram a contemporary rock station can't work on New York radio - even though the one she has programmed for the last 3-1/2 years ends its run Thursday, apparently to be replaced by news aimed at soccer moms.

WRXP (101.9 FM), which switched from smooth jazz to rock in February 2008, is being sold by Emmis to Merlin Media, and while the deal hasn't closed yet, Merlin takes over the programming Friday.

Listeners will hear music for a couple of weeks until Merlin launches its new format, expected to be all or mostly news targeting women in their 30s and 40s.

On the surface, this change might seem to again support the often-heard mantra that when it comes to radio music, New York is a rhythm town, not a rock town.

Fram, a WRXP host as well as program director, says she sees every indication that's not true.

She notes that for the last three months, an average of about 2.3 million people per week at some point tuned to WRXP. While that's about half the audience for WHTZ, WLTW or WKTU, it's not a small number.

"There are a lot of rock fans in this area," Fram says. "[Classic rock] WAXQ is a fine station, but there was room for us, too.

"We wanted to be the heritage rock station for people who grew up in the '90s or later, and we could have. Without us now, where will you hear a new Eddie Vedder or Mumford and Son?"