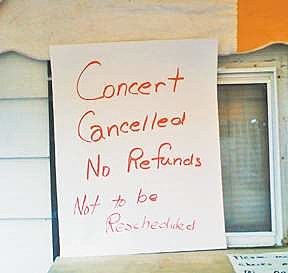 "Tuesday was a miserably wet day with heavy rain, wind and even hail wreaking havoc throughout Indiana and rolling on into Ohio, leaving the fairgrounds' grandstand and track filled with mud and standing water.

Fair manager Duane Grimme and fair board president Dean Petry said the concert was canceled at about 4 p.m. after the production company contracted to set up the stage, sound and lighting refused to do so, citing the bad weather.

"The fair board wanted to have the concert. [Foreigner] wanted to play. The production company wouldn't set up the stage," Grimme said.

"It was out of our control," Petry said. "We feel awful about it."

Grimme said that the production company likely shied away from setting up the concert after an incident during a storm in Camrose, Canada, where a concert stage collapsed, killing one woman and injuring about 75 others.

Ironically, by 6 p.m. Tuesday the rain had stopped in Eaton and the setting sun was shining. A hand-written sign at the fair office noted that there would be no Foreigner show, no rescheduling of the concert and no refunds." [pal-item.com]

Early rain, that also stopped, caused the Dan Deacon/Deerhunter/No Age show in Brooklyn on Sunday to move inside. All Points West started late the same day.