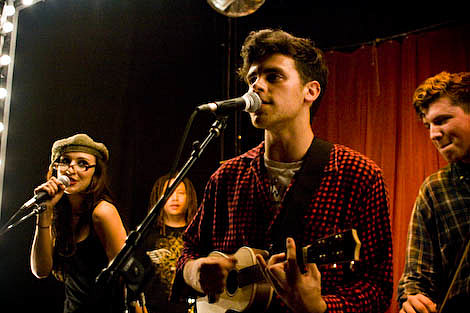 Some of the most dedicated, blog-aware North American friends of Noah and the Whale have correctly identified North American tour dates circulating on the internet.

It is with no little remorse and disappointment that we are compelled to cancel these dates. These words are being typed in the studio as we make progress on the next Noah and the Whale album. Between commitments in hereto-neglected Europe, we have made the sad but important decision to take time to develop these recordings over the winter months.

Despite this unavoidable necessity we would like to apologise to all the wonderful friends we made on our most recent American adventure, to anyone who has bought tickets or was preparing to do so.

The whole band enjoys an ongoing love affair with the US. The autumn tour was one of the most intense and heartening experiences of our lives and we were bristling with seasonal anticipation at the prospect of old faces and venues, not to mention new American audiences and experiences too. But there is simply not enough time in the world and we are sure that this next record will justify this difficult call.

With new songs to disseminate and even more America-famished, we will cross the pond to tour across the continent from March 2009. This is a promise, a published, globally-viewable promise.

Once again we want to express our most sincere gratitude for everyone who has seen us play, said they would see us play, or said two good words about the band. Noah and the Whale will be back and we will be back many times.

This is the third time the band was scheduled to play NYC, and the second time they cancelled the trip. Their promise to be back in March probably means they'll be at SXSW.