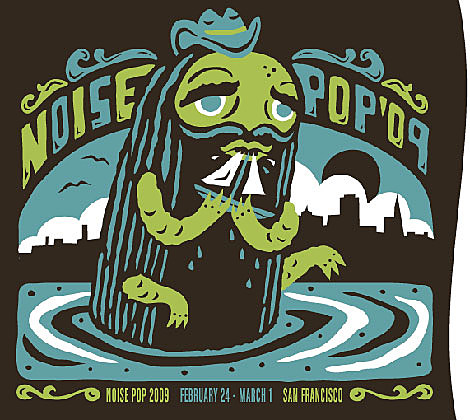 Antony and the Johnsons recently played the Apollo Theater in NYC. Read about it HERE. AC Newman just played the Bell House in Brooklyn. Read about that HERE. No Age was just at the Market Hotel. That one is HERE. Clues were supposed to play NYC, but didn't, and Goblin Cock is promising many more tour dates than just this one. More Noise Pop details below...

Early artist confirmations include New Pornographers front man A.C. Newman, No Age, Pinback side project Goblin Cock, Dear And The Headlights, the Bay Area debut of Clues and a very special performance by Antony and the Johnsons at Davies Symphony Hall. More confirmations will be announced very shortly.
The Noise Pop Film Festival continues its mission of focusing on films that embrace and reflect independent music and culture. Early announcements include "Johnny Cash at Folsom Prison" examining the most important day in the career of an American icon, and "Agile Mobile Hostile: A Year with Andre Williams," which follows the charismatic hit songwriter (he has recorded with Berry Gordy, Ike Turner, Stevie Wonder and Jon Spencer to name a few) and his struggle with his creative vision and his addictions. Many Noise Pop Film Festival screenings will include Q&A discussions with the filmmakers.

Noise Pop has announced that WolfgangsVault.com returns as a presenting sponsor of the 2009 Festival showcasing emerging artists. Wolfgang's Vault is the home for the past, present and future of live music including The Bill Graham Archives, Daytrotter Sessions, King Biscuit, selections from Noise Pop 2007 and 2008 and more, all available for free streaming online and by iphone. In addition to the Concert Vault music of Wolfgang's Vault, the site also offers concert posters, rock photography, vintage t-shirts and retro t-shirts, rock gear and concert related memorabilia. Wolfgang's Vault will offer exclusive Noise Pop 2009 concerts as free streams and free downloads of the bands destined to become household names.